According to the National Institute on Drug Abuse, doctors, communities, and others once believed that drug addicts were morally flawed, lacked willpower, and were generally bad overall people. This belief became ingrained as early as the 1930s. Unfortunately, although science long since disproved this belief, almost 100 years of thinking like this ingrained it into our culture. Despite evidence that addiction is a disease like diabetes or high blood pressure; people still think that it is a moral or ethical character flaw. They believe that addicts can control the addiction and choose to remain addicted to a substance. This belief is backed up by the fact that law enforcement, doctors, and a variety of others still treat addiction as an evil thing to be looked down upon. This belief hampers addiction recovery in a variety of ways.

Types of People who Abuse Drugs

People who are addicted to drugs are not:

Unfortunately, there are more people believe addicts are the classic movie or demonic vision of an addict than people who realize that addiction is a disease.

How Does the Stigma Prevent Treatment

Since there is a stigma attached to substance abuse, addicts fear losing their jobs, families, homes, and friends due to the exposure that entering treatment creates. It is an unfortunate fact that people automatically look down on those who were treated for addiction. They fear the looks that they get, the fact that people suspect them of using, and that people really do believe that the addict has n morals or so little will power that they will start using again at any second. The way they are looked at is both frustrating and produces feelings of guilt and shame. Seeking treatment just makes this worse.

Doctors do not treat addicts the same way they treat other patients. An addict may be afraid to discuss some of their issues for fear of poor treatment. One of the sad facts of addiction treatment is that there are cases of addicts dying due to lack of medical care or overlooked conditions. In these cases the symptoms were passed off as part of the addiction or drug seeking behavior. In some cases being constantly treated like a second class citizen causes depression, this depression leads to more drug abuse to compensate. Their legitimate concerns are not always treated because of the stigma attached to addiction.

Psychologist, psychiatrists, and therapists sometimes discharge addicts from mental health treatment because they believe that the addiction should be treated first. This happens even if the addict has already stopped using. This prevents them from both seeking treatment for a mental illness and from continuing treatment for addiction.

The stigma prevents people suffering from addiction from seeking the support they need from friends and family. This hampers addiction recovery because without the support structure many addicts fall back into relapse. 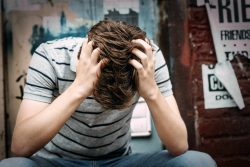 Doctors and their patients fall prey to the stigma attached to addiction treatment. One of the most common scenarios is this:

A chronic pain patient is suddenly denied the medication they are in need of because a doctor fears DEA retribution for prescribing an opioid painkiller. The doctor fears the stigma of being the doctor that provides a controlled substance. The patient is suddenly left to deal with withdrawal and chronic pain. In order to avoid this, the patient seeks out other ways to combat their illness, which can include the purchase of opioid painkillers illegally or switching to a drug like methadone. The patient then bares the stigma of being looked at as a drug addict on methadone or an illegal substance. They do not seek treatment because of the way that the doctors and pharmacists look at them.

This scenario also happens to people on anxiety medication, sleeping medication, and any other addictive substances used to treat a number of disorders. They hesitate to seek either the drug treatment they need or the drugs that they are rightfully dependent on. Many of them suffer under their condition due to this cycle instead of seeking treatment. When they are left to suffer, they may get involved in illegal activities to obtain the drugs that they need. They find themselves either in a dangerous cold turkey detox without medical support or continuing their addiction.

How to Fight the Stigma of Addiction

Although it is difficult, it is possible to fight the stigma of addiction and stop it from harming recovery efforts. According to an NBC News report titled,” Ending the Stigma of Addiction,” you can end the stigma of addiction by recognizing that addiction is a disease and not moral failing. You can speak out against this stigma and make sure that those around you understand what addiction is and how the way people view it can prevent someone from seeking treatment.

Stigma affects addiction recovery by preventing many people from seeking treatment for a variety of reasons. The only way to change this is for more people to realize that the National Institute on Drug Abuse and the federal government sees addiction as a disease and not a moral failing.