10 Reasons to Say No to Amphetamine Abuse

Amphetamines produce the types of effects that can easily appeal to people who live fast-paced lifestyles. College students, career professionals as well as family-minded individuals juggling various tasks and responsibilities may consider the added boost offered by amphetamines as a benefit, only to find themselves caught up in the drug’s addictive draw.

Amphetamine abuse comes with grave consequences to a person’s physical and psychological well-being. While commonly used to treat conditions involving narcolepsy and ADHD, over time, amphetamine abuse practices can severely compromise a person’s ability to function in daily life.

When compared with cocaine (a notoriously addictive drug), amphetamine’s damaging effects actually exceed those of cocaine. While cocaine only stays in the system for a couple hours, amphetamine drugs, such as Ritalin, Stattera and Concerta stay in the system for 12 hours or more depending on the drug. During this time, amphetamines force the brain to produce large amounts of neurotransmitter chemicals just like cocaine does.

In effect, amphetamine abuse places brain cells under enormous strain for prolonged periods of time as well as creates widespread chemical imbalances throughout the brain. These interactions make for a powerful drug capable of causing significant damage to brain function as well as to individual brain structures.

Tolerance level increases stem from the damaging effects of amphetamine abuse on brain cell structures. According to the National Institute on Drug Abuse, amphetamines interact with individual brain cells, forcing the release of massive amounts of neurotransmitters.

With repeated drug use, cells become overworked and suffer considerable structural damage in the process. When this happens, cells desensitize to amphetamine effects producing a weakened “buzz” or “high” effect. 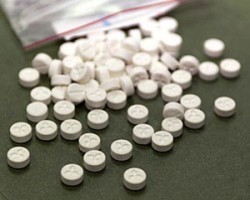 Binging on Amphetamines can lead to dependence.

Bingeing behaviors involve ingesting multiple doses of amphetamines in rapid succession. Once the brain’s tolerance reaches a certain level, users must engage in this practice in order to experience the desired drug effects.

This degree of amphetamine abuse poses a serious danger to a person’s overall physical and psychological well-being, as amphetamine effects interfere with heart function as well as blood circulation rates. In effect, bingeing practices can easily induce heart attack or stroke.

Amphetamines essentially speed up the body’s major systems. Ongoing use of these drugs places a considerable strain on the body as a whole.

For these reasons, people coming off amphetamine’s effects often experience “crashing” episodes. Crashing entails prolonged periods of sleep, sometimes for days at a time. Crashing may also bring on bouts of severe depression that can last for weeks, and in some cases months.

Amphetamine’s effects have an impact on most every major system in the body. Bodily systems most affected include:

People engaging in amphetamine abuse eventually start to experience health problems as bodily systems breakdown under the strain of the drug’s effects. Significant weight loss, a weakened immune system and overall fatigue are just some of the health problems regular amphetamine users can expect.

Before long, amphetamine effects start to impair a person’s cognitive functions as physical dependence turns into a psychological dependence. At this point, addiction has taken root so getting and using drugs has taken top priority in a person’s life. In effect, addicts lose the ability to care about any negative consequences that result from their drug use.

Amphetamine abuse drives users to isolate from friends and family, especially in cases where loved ones don’t engage in drug-using behaviors. Oftentimes, this sees a person neglecting important engagements or shirking family responsibilities in general. Under these conditions, relationship conflicts can be expected.

With continued amphetamine abuse, users gradually enter into a state of emotional turmoil that persists regardless of whether they’re under the influence of the drug or not. According to the Montana Department of Public Health & Human Services, this state of mind stems from radical changes in the brain’s chemical pathways. Under these conditions, suicide risk increases considerably.

As prescription-based drugs, amphetamines are intended to correct for the types of brain chemical imbalance caused by conditions like ADHD and narcolepsy. When taken by someone who has a normal brain chemistry, amphetamine effects turn the brain into a disease-prone environment in terms of creating conditions where psychological disorders like depression and anxiety can take root.

Compared to other drugs, the effects of amphetamine abuse progress at a much faster rate leaving users wide open for developing severe addiction problems. Once addicted, users enter into a downward spiral where amphetamines take on top priority in their lives. At this point, professional drug treatment help offers the only way back to having a normal life.

Overall, very few drug types can produce the degree of damage that comes with amphetamine abuse.