Amphetamines are a group of psychoactive drugs that create a stimulant effects on the central nervous system.  The most common amphetamines include amphetamine, dextroamphetamine and methamphetamine.  Each of these drugs produces an intense euphoria when taken for recreational purposes and has a wide potential to cause serious side effects.  Amphetamine abuse can lead to addition and potential long-term consequences for the user.

How Amphetamine Abuse Effects the Brain

Amphetamine abuse causes distinct changes in the dopamine and norepinephrine that is released from nerve endings within the brain.  According to the US National Library of Medicine, his can create a buildup at the synapses in the brain which will cause the cells to dramatically increase dopamine production.  When amphetamines are no longer being used, the production of dopamine ceases and the user will feel an intense sadness, depression or lack of pleasure as a result of the chemical changes that occur within the brain.

The effects of amphetamines typically last a few hours at most with the onset of the high taking place within mere minutes.  Sustained amphetamine use can lead to long lasting effects that may stick around for more than just a few hours.  In fact, amphetamine abuse that continues for many weeks or is heavy in nature can lead to serious side effects such as amphetamine induced psychosis which will create similar patterns of paranoia and anxiety to that seen in an individual who has been diagnosed with schizophrenia. 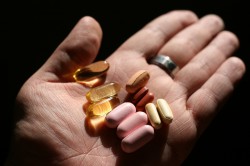 The mental effects of amphetamine abuse can last for a few hours.

As the amphetamines wear off, many of the effects will also wear off.  Sustained amphetamine abuse can lead to permanent damage to the heart which may cause an increased risk of serious side effects of complications to occur with future amphetamine abuse.  People who abuse amphetamines regularly have an increased risk of suffering from a heart attack or stroke following their use of these drugs or while under the influence of the drugs as the heart eventually cannot take the added pressure that comes from the induced high associated with using amphetamines.