A stimulant drug often used to treat ADHD and sometimes other medical issues such as narcolepsy and certain types of depression, amphetamine can be a beneficial medication when used in the correct dosage as prescribed by a doctor. However, there is a high potential of abuse with amphetamine, as it is a schedule II drug according to the NIDA, and its abuse can lead to addiction, cardiovascular problems, overdose, and even death. One must be extremely careful when taking amphetamine not to let these issues occur.

Amphetamine was first synthesized in 1887 b L. Edeleano, a German chemist. Its purpose was not originally to be a stimulant and the effect that the drug causes went unnoticed until the early 1930s. Since then, it was marketed as a respiratory stimulant and an inhaler, a hangover cure, a weight loss drug, and a drug to treat “vomiting associated with pregnancy.”

Now, amphetamine is used largely as a prescription drug to treat ADHD and a few other issues while it is also commonly abused. Methamphetamine, which was derived from amphetamine in 1919, is a highly abused and extremely dangerous drug.

What are the Side Effects of Amphetamine? 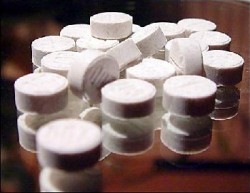 Many of these issues can occur in someone who is taking amphetamine as prescribed and not abusing the drug while those who do abuse it will likely experience more intense versions of these side effects. There are also dangerous side effects caused by amphetamine, such as:

Amphetamine can be a beneficial drug, but its side effects make it potentially dangerous even to those who take it as directed. Remember to always

Those who abuse amphetamine in large amounts are in danger of extreme health risks. For example, the NIDA Teen states that “taking high doses” of amphetamine can cause:

Amphetamine abuse can be extremely dangerous and, over time, can cause many issues that can become more and more hazardous to the health of the individual. The weight loss and poor nutrition caused by amphetamine abuse can leave a person emaciated, especially if they abuse the drug constantly. Heart failure can occur if a person takes too much of the drug, often leading to coma and death.

There are also psychological and behavioral issues associated with amphetamine abuse. Someone who takes amphetamine in higher doses than directed for a long period of time could suffer from stimulant-induced psychosis which includes:

CESAR describes this psychological state as a “psychosis similar to schizophrenia.” Though it is temporary, if left untreated, this mental state can cause extreme problems in all areas of the individual’s life, as they will often behave in a way that they would not normally, causing severe problems.

When someone becomes addicted to amphetamine, it is usually characterized by their inability to stop abusing the drug, even if they want to. Addicts will often abuse the drug for several days straight and then sleep heavily when they stop. They will repeat this binge-crash cycle over and over, which can cause and perpetuate addiction more quickly. According to the ADF, withdrawal symptoms caused by amphetamine addiction can include “tiredness, panic attacks, crankiness, extreme hunger, depression and nightmares.”

Amphetamine addicts will often be unwilling and unable to stop abusing the drug on their own. This is why formal treatment is needed in this case. If the individual keeps abusing the drug even when it causes severe problems in their life, they will need addiction treatment in order to stop. There are no FDA approved medications to treat amphetamine addiction, but patients in treatment are often given antidepressants and other medications to help curb withdrawal symptoms. Treatment relies heavily on therapy sessions that help patients learn more about their addictions and ways which they can use to fight cravings and triggers which can be detrimental to their recovery.

It can sometimes take months or even years for a person to stop feeling intense cravings for amphetamine. And even after this time, they can still experience them every once in a while. Amphetamine addiction should be treated immediately, and amphetamine abuse should be discussed and treated ideally before it becomes an addiction.

Many people like the way amphetamine makes them feel and that is why they might abuse the drug. Because it causes alertness, weight loss, and in high doses, euphoria, individuals tend to abuse it without considering the consequences. This can lead very quickly to health problems and addiction which is why amphetamine should not be taken outside of a doctor’s dosage under any circumstances.