Typically prescribed to treat narcolepsy and attention deficit-hyperactivity disorder, some of the more commonly used dextroamphetamine-based drugs include:

According to the University of Maryland, dextroamphetamine belongs to the Schedule II class of controlled substances, which makes for a high abuse and addiction potential. The potential for dextroamphetamine abuse greatly increases when taking this drug for recreational purposes or when exceeding prescribed dosage schedules.

The dangers of dextroamphetamine abuse become more so apparent with long-term use, though this drug’s damaging effects take root during the early stages of drug use. Dextroamphetamine continues to warp brain, body and central nervous system functions to the point where a person’s health and psychological well-being start to deteriorate over time. With continued use, dextroamphetamine abuse will inevitably lead to addiction. 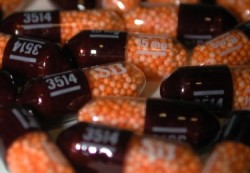 Dextroamphetamine acts as a central nervous system stimulant, speeding up brain chemical processes, which in turn speeds up most every major system in the body. These effects take a tremendous toll on brain cell functions as well as on the body in general.

Dextroamphetamine comes in tablet form to be taken orally according to a prescribed schedule. While exceeding prescription directives carries a considerable risk for dextroamphetamine abuse, methods of abuse work to intensify the drug’s effects.

The most common methods of abuse involve crushing up tablets into powder form and smoking, snorting or injecting the drug as a solution. These practices greatly increase dextroamphetamine’s abuse potential.

In powder form, a person feels the effects of the drug much sooner than when taken in pill form. Dextroamphetamine effects include:

In general, drugs that produce near immediate effects carry a higher abuse potential than those producing slower effects. Dextroamphetamine abuse practices not only enhance the drug’s effects but also speed up the rate at which abuse takes place.

As a result, the brain’s tolerance level for dextroamphetamine can increase at an extremely fast rate. With rising tolerance levels comes additional brain cell damage, which in turn drives increased dosage amounts.

Before long, this vicious cycle drives users to engage in bingeing behaviors where large doses of the drug are taken in rapid succession. This practice, in and of itself, can induce any number of serious conditions, some of which include:

Ultimately, bingeing practices cause widespread brain cell deterioration. This form of dextroamphetamine abuse also damages most every bodily system in terms of the wear and tear the body undergoes when under the influence.

The damaging effects of dextroamphetamine abuse on brain function in general inevitably affect the areas of the brain that regulates emotional responses, also known as the limbic system. Much like a person feels “fried” after drinking 20 cups of espresso, dextroamphetamine abuse “fries” the neural pathways throughout the brain. Feelings of rage, anger and aggression can happen on an increasingly frequent basis as the drug wears away at essential brain chemical processes.

According to the Center for Research on Globalization, prescription-based amphetamines were once given to soldiers in combat in an effort to enhance feelings of rage, aggression and murderous intent. In spite of dextroamphetamine’s intended medicinal purpose, this inherent potential for inciting anger and aggression-based tendencies can pose real harm to the user as well as to others.

As the brain becomes physically dependent on dextroamphetamine effects, brain cells lose their ability to function in the absence of the drug. Once the brain’s cognitive centers reach this point, users come to believe the drug to be an essential part of their daily existence. When this happens, a person will devote his or her entire life to getting and using the drug.