Dangers of Amphetamines and Alcohol

About Amphetamines and Alcohol

Amphetamines are psychoactive drugs that affect a person’s brain chemicals causing them to feel more alert and hyper. The combination of amphetamines and alcohol contains numerous dangers and should not be toyed with.

Amphetamines and alcohol together can cause a person severe physical illness, such as excessive vomiting, hallucinations, paranoia, anxiety, stomach pain, headaches, heart failure, and can lead to a person ending up in a coma. 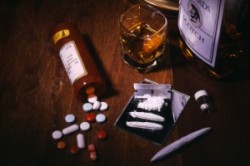 Is it extremely dangerous to mix amphetamines with alcohol!

One of the scariest and most dangerous aspects of mixing alcohol with amphetamines is not the physical health concerns, but the mental. When the two drugs are mixed a person can completely lose control of their self and commit horrible crimes or have irrational behavior that they are not aware of or that they do not care about at the time due to the affects of the drug. This can lead to person ending up in jail or highly regretting their actions the following day after they sober up.

The dangers of amphetamines and alcohol are plentiful and a person beginning to abuse either substance should seek out treatment from an addiction treatment facility. Drug addiction is not only harmful to a person’s body but also highly impacts a person’s behavior causing them to ruin relationships in their life and causing them to loose things they care about such as family, friends, money, and jobs.

Amphetamines, on their own, are highly addictive and form quick tolerance levels in a person’s body, usually resulting in a person needing more and more of the drug to receive the same effects. Amphetamines are also illegal to take if not prescribed, and if caught a person can end up doing jail time. If a person continues to abuse amphetamines and alcohol together they will eventually have major health problems and could lead to them overdosing and not even realizing it.