If you or a loved one is suffering from addiction and needs help, call 800-768-8728(Who Answers?) to speak with a caring specialist that can assist you.

Projection is the act of presenting one’s emotions to the outside world without being consciously aware of it. An example would consist of an individual has a bad day at work and projects their aggression on their spouse, making them look to the individual as the ones who are burdened with the trait instead of themselves.

By putting these stressful emotions onto another person, it allows the projector to feel as though they are innocent of that trait.

Projection as a Coping Method 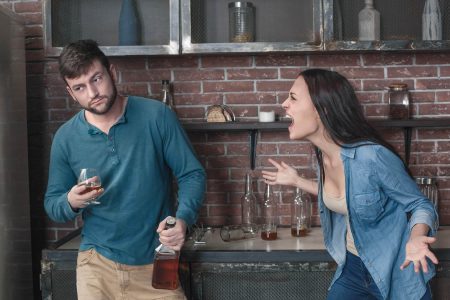 Projection has positive and negative effects on recovery.

Projection is both a coping method and a defensive mechanism, which puts a thin line between hurt and benefit for the addict. Many counselors who work with addicts to teach them new coping methods for recovery will use projection to allow the client to let out any negative emotion they may be experiencing.

According to the NIDA, a good counselor will be able to maintain a strong façade by correctly identifying, deflecting, controlling, tolerating, and interpreting the projection as it is occurring. Typically, projections tend to stem from rage and self-loathing over their choices and by learning to cope with it, the individual stands a better chance against relapse.

Projection has benefits that are necessary to help the individual feel as though they are protecting themselves. By using this as a coping method, the individual is given the opportunity to set their inner conflicts aside by pushing them outward on someone else and putting more of a focus on something else.

This can be due to the limitations that he or she feel and the stage of healing they are in. The ego takes a huge hit with the addiction and beginning stages of recovery, which can make it vulnerable to emotions that are just too painful for them to deal with.

Projection can also enlighten the individual to show them repressed feelings that they did not otherwise notice until another person portrayed them. By seeing the emotion that troubles them confronted to them, it can show them how much it disturbed them. It teaches them about their psychological dynamics when projection is used on them.

Projection is not always a good thing and can become destructive when used inappropriately. It can cause the perception of the person to mix with the projection the individual puts upon them. When that perception is distorted, the person can react incorrectly because of it, which causes valuable relationships to break and the vital support for the individual’s recovery.

Projection can also cause people to believe that others are friends or enemies when they are not. It can cause the person to feel emotions that exist because he or she are unable to perceive reality over the projected image they have created.

According to the NCBI, projective identification can be the individual’s way of processing the discharging internal pollutants into the person, which allows them to deny that the traits were in any way connected to themselves to begin with.

Projections are common with recovering addicts and can help in some cases, but otherwise it could become destructive. The projection, when used as a coping method, can enlighten the individual to the behaviors that bother them and allow them to set negative emotions aside to begin the healing process.

If it is used as a defense mechanism, it can distort the realty of the people they are projecting to and allow them to deny rather than face their own negative traits.

If you think, you may suffer from projection and want to seek out counseling to help sort through it, give us a call at 800-768-8728(Who Answers?) today.