Amphetamines are well known for their ability to increase energy levels, improve mood and enhance overall focus and concentration. In spite of these benefits, their potential for abuse and addiction has placed considerable limits on their use as medicinal drugs.

Alcohol, another known addictive substance, produces the opposite effects of amphetamines by slowing down brain and bodily functions. When combined, amphetamines and alcohol can make for a dangerous mix.

No doubt, the college party scene has promoted the mixing of amphetamines and alcohol as a means for “partying” harder and longer. In the process, partiers (and anyone else who goes this route) place themselves at risk of serious physical and psychological repercussions.

While mixing amphetamines and alcohol may seem like a good idea at the time, the strain this practice places on the body creates conditions for the “perfect storm” to develop.

Amphetamines work fairly well in treating ADHD, narcolepsy and depression disorders. When used for nonmedical or recreational purposes, the damaging effects of this class of drugs far outweigh any perceived, short-term benefits.

Amphetamines naturally stimulate the body’s central nervous system (CNS) processes, speeding up respiratory, cardiovascular and circulatory functions among others. With long-term use, brain and body functions reach a state of “burn-out” that can cause any number of physical and psychological problems to develop.

According to George Washington University, amphetamine short-term effects include:

Though it may not feel like it, the mixing of amphetamines and alcohol places an enormous strain on bodily processes. 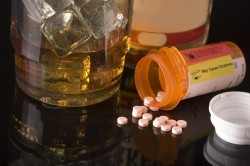 Mixing alcohol and amphetamines can have serious consequences.

Alcohol’s depressant effects also target the body’s central nervous system, which works to slow down any and all systems regulated by the CNS. Like amphetamines, the brain quickly develops a tolerance for alcohol’s effects driving regular drinkers to increase their consumption amounts on an ongoing basis.

As these two substances easily counteract one another’s effects, mixing amphetamines and alcohol has a camouflaging effect on a person’s ability to gauge his or her alcohol intake amounts. Amphetamine’s ability to stimulate CNS processes impairs a person’s ability to tell if he or she is drunk or tired. Under these conditions, the body’s warning signs shut down so users are more likely to keep drinking.

According to the University of Notre Dame, the resulting effects from mixing amphetamines and alcohol places users at an incredibly high risk of alcohol poisoning. Amphetamines all but diminish the depressant effects of alcohol from the user’s standpoint.

In cases where a person continues abusing amphetamines and alcohol, serious side effects will likely develop, some of which include:

Ultimately, continued use will lead to overdose and a potentially life threatening situation.