10 Signs Your Son or Daughter is Abusing Amphetamines

Are you concerned that your son or daughter may be abusing amphetamines? Look below for some of the strongest signs of prescription amphetamine abuse, and call 800-768-8728(Who Answers?) now to find rehab centers that will fit their needs.

As stated by the Drug Enforcement Administration, “Chronic abuse produces a psychosis that resembles schizophrenia and is characterized by:”

If you begin to notice these symptoms, it is a sign that your child has been severely abusing amphetamines and will require immediate treatment.

Depression is a side effect of amphetamine abuse that will often begin to become obvious when your child is in the crash period of the binge-crash cycle. Especially if they have never shown signs of this disorder, they are likely abusing their medication. 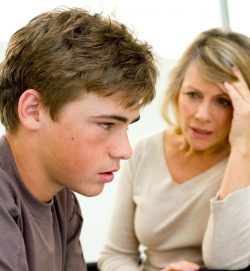 Your kid may show signs of depression if they’re abusing amphetamines.

The Center for Substance Abuse Research lists dilated pupils as one of the short-term side effects of amphetamine abuse. You will be able to recognize that your son or daughter has just taken a large dose of the drug if they exhibit this effect.

Talkativeness or excessive activity are both signs of amphetamine abuse. Because the drug is a stimulant, it will increase your child’s actions and make them do everything faster and at an increased level.

Your child may begin to exhibit delusions of grandeur or believe other things, such as paranoid conspiracies. This is the drug altering their thought processes after being taken in very high doses.

When your child begins to lose weight rapidly, they are likely becoming very malnourished as a result of decreased appetite. Some individuals even abuse amphetamines specifically for this reason, but the weight loss associated with it is not healthy.

Motor, verbal, or facial tics are a rare side effect of amphetamines, but when one begins to abuse these drugs, they become much more likely to occur.

If your son or daughter is keeping certain items in their room or home, such as

this is a strong sign of amphetamine abuse that will absolutely require treatment.

Many drug users can become hostile when other people in their lives express concern about their substance abuse. But amphetamine addicts are especially likely to become violent because of the nature of the drug they are abusing. Make sure to protect yourself as well as your child in this instance.

The best way to get your child help if you believe they are abusing high doses of amphetamines is to seek out an addiction treatment program. Call 800-768-8728(Who Answers?) now to find safe, reliable rehab centers where your child can recover from their substance abuse.