Do you think that you know someone who may be suffering from amphetamine addiction? Would you be able to spot the signs of amphetamine addiction if someone you know were using these drugs? Sometimes, spotting the signs of addiction takes more than just cueing in on what an individual is doing, it takes paying close attention to the hygiene, personal effects, appearance and overall demeanor of the individual to spot an addiction and stop it in its tracks.

The signs of amphetamine addiction often present similar to symptoms of cocaine addiction or an addiction to some other drug. The earliest signs typically include tolerance and increased desire to use the drugs but these signs are not “visible” to an outsider. Only the user can spot these two internal or intrinsic signs of addiction. As an outsider, you must be able to recognize the following warning signs in order to help someone you love:

Hopefully it doesn’t take so long to spot amphetamine addiction that these serious side effects set in but in the event that you overlook the problem or it begins to spiral out of control, chances are the user will be malnourished and may even have lost a significant amount of weight. The weight loss will continue as long as amphetamines are being used and as the addiction progresses, the user may care less and less about his or her own health. 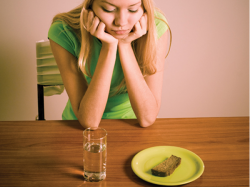 Loss of appetite is a sign of amphetamine addiction.

Do you know someone who stays up for days at a time and then sleeps for a prolonged period of time? One of the most commonly spotted signs of amphetamine addiction has to do with the odd patterns of sleep that occur when a user is abusing amphetamines. The addiction may cause the user to stay awake for a few days while he or she is binging on the drug and then, when the crash comes (and it always does come) the user will sleep for 2 or 3 days straight, waking only to use the restroom or maybe to get something to drink.

The demeanor of an amphetamine addict will often change substantially over time and as the addiction progresses there will be more and more periods of upset, anguish and dismay paired with fewer periods of happiness, contentment and overall joy. Irrational behavior will ultimately ensue as the user becomes more entwined with the addiction and less focused on the reality of everyday life. The user may have unrealistic feelings or act as if he or she is powerful against everything and everyone; in reality the addiction is tearing the user up inside causing great harm and dismay.

Does someone you know wear long sleeves all the time, even in the summer? If you suspect an individual of using amphetamines and he or she tends to cover most of the body up even in the hottest months of the year there could be a problem with injecting drugs such as amphetamines. Infections often occur as a result of injecting drugs and they can lead to boils or other serious side effects that create noticeable harm to the skin and other areas of the body. The user may try to cover these symptoms up or otherwise keep the problem out of the sight of others.

If you’ve confronted a user about his or her amphetamine abuse and the user downplayed the problem there are one of two possibilities here: 1) the user is really addicted and doing what he or she can to make the problem seem like less of a problem than it really is; or, 2) the user is not addicted and you confrontation regarding the problem was unwarranted. Most of the time, when an individual downplays a problem the addiction is actually even worse than you may think and there is a real need for help.