Is Long Term Use of Amphetamines Dangerous?

Amphetamine drugs have seen a long history of various uses and classifications. While once thought to be effective remedies for many everyday ailments, new discoveries have uncovered the dangerous effects the long-term use of amphetamines can have.

In spite of this new knowledge, an estimated two million Americans reported abusing amphetamine drugs in 2007. Though amphetamines come in both legal and illegal forms, the dangers associated with the long-term use of amphetamines remains the same.

Amphetamine effects target certain key areas of the brain and central nervous system. Over time, these effects can cause widespread physical and psychological damage. Unfortunately, it doesn’t take long before regular users become hooked on the drug’s effects, which opens the door for the long-term use of amphetamines to develop.

The dangers associated with the long-term use of amphetamines are many and can vary depending on a person’s overall health and psychological well-being. Ultimately, these dangers work to diminish a person’s ability to function and cope within everyday life.

Amphetamines first hit the market in the 1930s under the brand name, Benzedrine, an over-the-counter nasal decongestant in inhaler form. From there, amphetamines were prescribed as a treatment for narcolepsy and ADHD, both uses which still continue today.

As amphetamine’s primary effects produce increased energy, focus and confidence, these drugs became a go-to remedy for soldiers in combat during World War II in the form of Methedrine and Dexedrine. To this today, truckers and college students alike still use (abuse) amphetamines in order to enhance energy levels and improve concentration and focus.

The most commonly used amphetamine drugs, both legal and illegal, include –

When taken as prescribed, the dangers associated with the long-term use of amphetamines remain fairly minimal though these drugs are rarely prescribed on a long-term basis because of the risks surrounding the use of these drugs. The potential dangers that come with the long-term use of amphetamines account for why this class of drugs holds a Schedule II controlled substance narcotics classification. 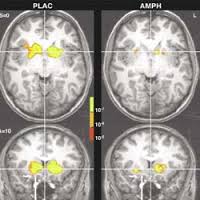 Amphetamines gain direct access to the brain’s chemical workings and over time alter brain chemical functions in dangerous ways. According to the U. S. National Library of Medicine, amphetamines speed up brain and central nervous system processes by stimulating the release of dopamine and norepinephrine neurotransmitter chemicals from specific brain cell groups.

Much of the danger brought on by the long-term use of amphetamines results from the way these drugs weaken brain cell structures, which sets off a domino effect, especially when abused. The weaker brain cells become, the large the dose needed to produce the drug’s desired effects. Herein lies the driving force behind amphetamine abuse and the vicious cycle of addiction.

Amphetamine’s chemical interactions in the brain alter a number of major bodily processes, some of which include –

Consequently, the long-term use of amphetamines poses the greatest danger to these affected areas.

As brain cells grow weaker from overuse, they lose their ability to supply needed neurotransmitter chemical supplies. As a result, chemical imbalances start to form throughout the brain and body. Before long, the cells require amphetamine’s effects in order to function normally.

These long-term effects of amphetamines will grow progressively worse the longer a person keeps abusing the drug.

The brain’s tolerance level for amphetamines rises quickly as brain cells weaken from continued drug use. People who use amphetamines on a frequent basis will get to a point where they’ll have to ingest massive doses of the drug in rapid succession, or binge in order to experience the desired “high” effects. The long-term use of amphetamines only works to promote bingeing practices.

Bingeing places an incredible strain on brain and body processes and can even be life-threatening in cases where the certain bodily functions start to breakdown. Over time, a person’s overall health deteriorates from the wear and tear that results from the long-term use of amphetamines.

According to the Institute for Substance Abuse Treatment Evaluation, the long-term use of amphetamines places users at risk of developing any number of serious medical problems. As amphetamines naturally increase blood pressure levels, the materials that line the heart and blood vessels start to wear away from the excess strain.

These effects become especially dangerous for people who have arterial blockages. With the long-term use of amphetamines, the risk of stroke, heart attack and heart disease increases considerably. The body’s digestive tract undergoes damage in much the same way as the heart and blood vessels, which ultimately leaves users in a malnourished state.

Considering how quickly brain tolerance levels rise, the long-term use of amphetamines will inevitably lead to addiction. Once brain chemical imbalances reach a certain point, amphetamine’s effects start to warp a person’s thinking and emotions.

The dangers of addiction stem from the psychological dependency a person develops towards the role amphetamines plays in his or her life. This type of dependency has the power to alter a person’s motivations, priorities and daily routines.