Symptoms of Amphetamine Use

Psychological Symptoms of Amphetamine Use

A person who is using amphetamines will experience many psychological symptoms. Most commonly, amphetamine use causes alertness, wakefulness, and restlessness. The will also “increase focus and attention,” according to the NIDA. These symptoms are great for someone who is suffering from ADHD or a similar disorder and needs to be more focused, alert, and energized in order to not become bored or distracted at inappropriate times.

Other psychological symptoms of amphetamine use, according to CESAR, are:

The psychological symptoms of amphetamine use are not all positive, however. Many people experience feelings of aggression or hostility when they take the drug in high doses, or even in normal doses. People will feel a decreased ability and need to sleep, keeping them up late if they take the drug in the afternoon.

Amphetamine use has strong psychological symptoms that can work both to the benefit and the detriment of the individual. Either way, if a person is abusing amphetamine, the symptoms will only become more pronounced and often worse.

Physical Symptoms of Amphetamine Use 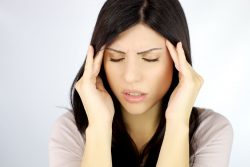 Headaches, weakness of extremities, and fever are potential negative symptoms associated with amphetamines use.

Amphetamine decreases a person’s appetite and, therefore, may cause weight loss. For many years, it was prescribed to those who wanted to lose weight but can cause malnutrition if the individual is not careful.

The use of amphetamine speeds up the reactions in the body, the opposite to what opioids or CNS depressants do. The body begins to run hotter, the heart beats more quickly, and the person may experience issues because of this.

It is important for users of amphetamine to listen to their bodies and, if they realize that something does not seem normal or if they are unable to live their daily lives with these symptoms, they should speak to their doctor immediately. There are many symptoms of amphetamine use which can be dangerous and an indication of another problem.

The NLM states that, should someone experience any of the symptoms listed below, they could be signs of a more severe reaction to amphetamine or even of amphetamine abuse. These symptoms are:

Staying on top of your symptoms and knowing which ones are signs of a problem is important in amphetamine use. Remember, you should never experience symptoms that make your life too difficult and become detrimental to you.