Prescription amphetamine medications offer effective treatments for conditions involving narcolepsy, fatigue syndrome, depression and attention-deficit hyperactivity disorder. These same medications were also given to combat soldiers as means for reducing fear and eliciting murderous rage-based tendencies, according to the Center for Research on Globalization. This drastic contrast between medicinal purposes and combat purposes calls into question the potential dangers involved with using prescription amphetamines.

The prescription requirement attached to certain amphetamines no doubt points to their narcotic properties and potential to cause considerable damage to the body. The dangers surrounding prescription amphetamines exist for both short-term and long-term users. Ultimately, the inescapable potential for addiction trumps all. 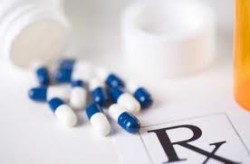 Though their medical purposes are certainly important, some prescription amphetamines are potentially very dangerous.

Any drug classified as a narcotic falls under the controlled substances category. Controlled substances are well known for their powerful effects on brain and body functions as well as for their high potential for addiction. According to the University of Maryland, prescription amphetamines belong to the Schedule II class of narcotics while Schedule I class drugs, such as cocaine and heroin hold no medicinal purpose worthy of risking their potential for harm.

In effect, the only things that separate Schedule I and Schedule II class narcotics are the drug potencies and medicinal purposes of each class. This means, were it not for their somewhat weaker chemical properties and medicinal functions, prescription amphetamines would easily take on characteristics of a Schedule I narcotic substance.

Over time, prescription amphetamine users start to develop serious medical and psychological conditions, some of which include:

Unfortunately, the dangers associated with long-term amphetamine use may well create even more serious problems than those that require amphetamine drug treatment. The potential for addiction and the brain damage that often accompanies prescription amphetamine use represent real-time dangers that grow worse with ongoing use.

END_OF_DOCUMENT_TOKEN_TO_BE_REPLACED

Calls to numbers on a specific treatment center listing will be routed to that treatment center. Additional calls will also be forwarded and returned by one of our treatment partners below.

Calls to any general helpline (non-facility specific 1-8XX numbers) for your visit will be answered by one of our treatment partners, a paid advertiser on Amphetamines.com.