Dexedrine, a brand name stimulant drug, is used for the treatment of several different medical issues from ADHD to narcolepsy. While Dexedrine is an extremely helpful tool which a regimen of treatment may be built around, it can also cause many side effects and other issues as well for those who are prescribed it.

Dexedrine is the most common brand name for dextroamphetamine, a stimulant drug that is derived from amphetamine. Dextroamphetamine is still considered part of the amphetamine group. According to CESAR, “Amphetamines are a group of synthetic psychoactive drugs called central nervous system (CNS) stimulants.”

You will need a doctor’s prescription in order to legally obtain Dexedrine. The drug can be very powerful which is why it is prescription-based. The NLM states that Dexedrine works by “changing the amounts of certain natural substances in the brain.”

Users of Dexedrine are told not to “take a larger dose, take it more often, or take it for a longer time than prescribed” by their doctors. While Dexedrine has been known to help many individuals, it has intense side effects and can become habit-forming.

Signs and Symptoms of Dexedrine Use

If someone is using Dexedrine, even in the way they are prescribed to, there will be some behavioral and physical signs and changes that point to this type of drug use.

These common signs of Dexedrine use are:

The side effects of Dexedrine use are:

Most of these side effects are not incredibly harmful, especially if the drug is being taken in the correct doses. However, they can be problematic for some individuals which is why Dexedrine users should feel comfortable to talk to their doctors. They may need to be put on a lower dose of the medication.

Dangerous Side Effects of Dexedrine Use

These side effects indicate that a problem has occurred in an individual’s Dexedrine use (either an allergic reaction, a dangerously high dosage, etc.) and someone who experiences them should call their doctor immediately. These possibly dangerous side effects include:

If you experience one or more of the issues listed above during your normal Dexedrine regimen, you should call your doctor immediately, as you may need to be switched to a different medication. Someone who abuses Dexedrine will be more likely to experience these dangerous and uncomfortable side effects. 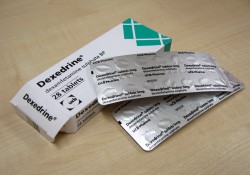 Prescription amphetamines have a high level of risk and a high potential for abuse.

According to the DCP, Dexedrine is a Schedule II drug meaning that it has a high potential for abuse but that it can still be used for medicinal purposes. Some of the common street names used for Dexedrine are:

While Dexedrine may be abused in many ways, it is most often swallowed, crushed and snorted, or crushed and injected. These final two ways of abusing the drug cause the effects to come on much faster and the individual to experience a quicker high. The street values for different types of dextroamphetamine drugs (including Dexedrine) run from “$5-$10” per pill.

Those who abuse Dexedrine may do so for different reasons. Many people abuse stimulants because they want to lose weight. One of the side effects of Dexedrine is that it suppresses a person’s appetite and causes weight loss. Especially if the drug is abused, this weight loss can become severe. Others may take Dexedrine in large doses in order to feel a euphoric high. But the most common abuse of Dexedrine (and other prescription stimulants) is by college students using it as a study aid.

According to the NIDA, “A growing number of teenagers and young adults are abusing prescription stimulants to boost their study performance in an effort to improve their grades in school.” While it has been proven that the abuse of these drugs actually causes lower grades, it is still a common practice, especially among full-time college students. Dexedrine is one of the prescription stimulants that is abused in this way along with Adderall, Vyvanse, and Concerta.

Anyone who abuses Dexedrine for a long enough time may become addicted to the drug. Dexedrine causes tolerance over time and a person abusing it will need to take higher and higher doses to feel the same effects. This, plus a growing dependence on the drug which will cause the individual to feel like they need it to function, leads to addiction.

Someone who becomes addicted to Dexedrine may experience many different issues including:

Dexedrine is a dangerous drug when abused that can lead to many problematic effects. While individuals who take Dexedrine without a prescription or in higher doses than prescribed may think that they are in control of their drug use, it will eventually become too much for them to control. Drugs like Dexedrine change the way the brain works over time when abused, leading to an inability to stop taking it no matter how problematic the consequences. This is why Dexedrine addicts need formal drug abuse treatment.

Dexedrine addiction treatment is necessary for those who experience an inability to stop abusing Dexedrine. While some people may want to attend treatment in an inpatient facility where they can receive around-the-clock care in an environment where they will be supervised by medical professionals, others may only need outpatient care.

Like all other drugs of abuse, there is a potential for relapse during Dexedrine recovery, and patients should be given all the tools to help avoid that possibility. If someone has been abusing Dexedrine for more than a few months, it is likely that they will need treatment for Dexedrine addiction.

One of the first treatments Dexedrine addicts will usually undergo is detox from the drug. According to the NIDA Teen, “When a person who regularly abuses stimulants stops taking them, they may experience withdrawal symptoms.” These symptoms will be controlled in medically-assisted detox. The common withdrawal symptoms caused by Dexedrine are:

According to the CHCE, different medications may be used during this stage to help treat these intense withdrawal symptoms including antidepressants (in the case of severe depression and thoughts of suicide), neuroleptics (to treat delirium which can occur simultaneously with withdrawal if the person is experiencing stimulant-induced psychosis), and anticraving agents.

This can be very beneficial to a patient’s long-term recovery, but it is important to remember that medically-assisted detox is not a treatment for addiction. Because there are no FDA-approved drugs to treat addiction to stimulants, behavioral therapy is the most commonly used addiction treatment for Dexedrine.

Behavioral therapy is the most beneficial treatment for Dexedrine addiction. One such type of treatment is cognitive-behavioral therapy. CBT helps patients see their drug abuse in a new way and learn new ways to cope with their stresses, triggers, and cravings instead of taking more Dexedrine.

Contingency management (a voucher-based therapy treatment) is also very helpful for stimulant abusers. Patients are given vouchers when they abstain from using Dexedrine which helps change the brain’s reward system back to a more positive process. There are many places where a person can receive therapy treatment for Dexedrine addiction.

Though Dexedrine is part of a useful treatment program for those with ADHD and other issues, it can be abused which, over time, will cause many problems for the abuser and their loved ones. Dexedrine should only be used by a doctor’s prescription, and any problematic effects should be discussed as soon as possible.