Amphetamines, according to the Drug Enforcement Administration, are stimulants that speed up the body’s system. Typically, these drugs are prescribed to those individuals who suffer from attention-deficit hyperactivity disorder, otherwise known as ADHD; however, they can be prescribed in other situations as needed. While they are currently well known regulated prescription drugs, they are also known for their other issues, such as abuse and addiction. Before taking any medication, it is recommended that the person seek medical advice.

There are also several street names for amphetamines, as they can and are well known abused prescription drug. Street names include speed, ecstasy, and crystal meth. Street drugs come in variety of different forms such as powder, paste, pills or injections and sometimes other unidentified drugs may be mixed in with it that can cause other severe side effects. 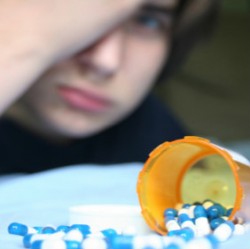 One potential side effect of amphetamines is dependence.

Amphetamines can have many side effects, and the type and duration of the effects depend on how the drug was used and the amount the person has taken. When taken as prescribed, this drug has side effects that include sweating, dilated pupils, loss of appetite, high blood pressure, accelerated heart beat, and a large boost or burst of energy. This stimulant also acts as a calming agent to those who suffer from ADHD. When this drug is taken as prescribed, it will stay in the person’s blood stream for several hours, even after the prescribed effects and additional side effects have disappeared.

Although amphetamines are prescribed for good medical reasons, they are also one of many commonly abused prescription drugs in today’s drug market. According to MedlinePlus, when taken in large amounts or in methods not intended such as injection, negative side effects can include an increase in body temperature, hallucinations, severe agitation and other negative effects. The effects caused by amphetamine abuse are similar to those caused by the drug cocaine. Abusing amphetamines can quickly lead to a serious addiction problem, which will then lead to many other issues and can potentially result in death.

While many people tend to believe addiction and addiction treatment belong with only “hard” drugs like cocaine, many people find themselves in need of help with amphetamine addiction. Professional help is usually needed to properly break the addiction cycle and tends to start with drug treatment such as detoxification or treatment with other drugs.

Due to the dependence on the euphoric state, many patients find it hard to cope without the drug, even after their body no longer physically craves it. Sometimes, an addiction can be so strong that a person may find themselves in need of a rehabilitation facility instead of an outpatient treatment program.