Amphetamine psychosis is a drug induced psychotic disorder that resembles s and the person loses touch with what is truly real. They may experience panic, paranoia, aggression, hallucinations, and have difficulty concentrating, incoherent speech patterns, or exhibit meaningless, repetitive, behaviors that become obsessive.

Help for amphetamine psychosis begins in an inpatient facility where the person can be stabilized physically and psychologically to prevent further harm to themselves or others with a formal amphetamine addiction treatment, following, to prevent future relapse.

Amphetamines have a longer duration of action on the brain than other stimulants such as cocaine. Although the psychosis may dissipate with decreased intoxication, in chronic abusers, the repeat over-stimulation of the central nervous system can cause long term damages that take a considerable amount of time to repair. In extreme cases, the person may remain subject to the amphetamine psychosis effects for several months or even years.

According to the SAMHSA, “Initially described by Young and Scoville in 1938, amphetamine psychosis is a usually brief and spontaneously remitting paranoid state that is frequently accompanied by intense, fear- evoking delusions and hallucinations, but with clear consciousness and a relatively intact formal thought process (Angrist, 1994).” 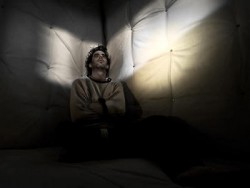 Amphetamine psychosis can lead to hallucinations and feelings of anxiety.

Because amphetamine psychosis can resemble other psychotic disorders such as schizophrenia, obsessive compulsive disorder, depression, hypomania, or catatonia, these mental health disorders must, first, be ruled out.

Acute amphetamine psychosis should be managed in a qualified, well-staffed inpatient facility with professionals trained in safety measures to maintain vital signs and administer medications or other medical and psychiatric interventions when necessary. The recommended approach is to reduce the risk of violence or symptom exacerbations by keeping the patient in touch with reality, reassuring them of their safety, and being prepared for the escalation of violent or harmful conditions.

Treatment for amphetamine psychosis often occurs in hospitals, inpatient facilities, or psychiatric institutions, depending on the diagnosis, co-existing conditions, and levels of care needed. While hospitals are often the first contact on an emergency basis, seeking treatment in a facility that specializes in this type of treatment can provide the most beneficial outcomes with immediate transition into an amphetamine addiction treatment program after the initial inpatient care is provided.

Finding the facility most suitable to you and your treatment engagement capabilities is important for your recovery. Many private rehabs can be found by exploring the options on line or you may contact your local hospital for recommended referrals. By contacting the facilities, directly, you can compare costs and payment plans, staff qualifications, duration requirements, counseling and service options, inpatient, outpatient, and aftercare treatment options, and whether they are qualified to treat co-occurring conditions.