Amphetamine drugs come in both legal and illegal forms. As a legal drug, amphetamine belongs to the Schedule II class of narcotic substances and can only be obtained in prescription form. Illegal forms of amphetamine come from synthetic materials manufactured in underground labs as well as from natural plant materials.

Commonly used as a treatment for narcolepsy, ADHD and extreme obesity, prescription amphetamine drugs include:

Whether used for treatment or recreational purposes, long term amphetamine use takes a toll on the brain and body bringing on a range of adverse effects, according to the U. S. National Library of Medicine. This is especially the case when abusing these drugs.

Amphetamine Effects in the Brain

Amphetamines stimulate or speed up chemical activities throughout the brain and central nervous system (CNS). When ingested, amphetamines effects include:

Both the brain and CNS rely on neurotransmitter chemicals to regulate the body’s various systems. Over time, long term amphetamine use disrupts this chemical system making it increasingly difficult for the brain to maintain normal bodily functioning. Recreational users in particular face the risk of developing serious medical and/or psychological problems with long term amphetamine use.

Consequences of Long Term Amphetamine Use 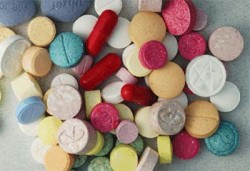 Longterm amphetamine use can cause physical dependency.

With long term amphetamine use, the brain starts to depend on amphetamine effects to regulate CNS functions. This comes about through the drug’s effects on neurotransmitter-producing brain cells.

In effect, amphetamines forces cell sites to release large amounts of dopamine and norepinephrine, both essential neurotransmitter chemicals. Long term amphetamine use overworks these cells to the point where actual structural damage starts to develop.

This damage works to weaken cells making them unable to produce neurotransmitter materials as normal. Before long, cell sites can no longer produce needed chemical amounts in the absence of the drug.

Physical dependency creates considerable chemical imbalances in the brain. These imbalances leave the brain unable to regulate bodily system in a normal fashion.

Under these conditions, withdrawal symptoms start to surface. Long term amphetamine use brings on repeated withdrawal episodes with users experiencing the following symptoms:

In effect, withdrawal symptoms reflect the state of chemical imbalance in the brain, with symptoms growing more severe as this imbalance worsens.

As Schedule II class drugs, amphetamines carry a considerable risk of abuse and addiction in spite of their use as medical treatments. In actuality, prescription amphetamines exist as the second most addictive drug class on the market, according to the University of Maryland.

Over time, the chemical imbalances brought on by long term amphetamine use start to interfere with the brain’s cognitive-based centers, most especially the brain’s reward system. The reward system regulates learning and motivation functions, which tie in directly with a person’s motivations, priorities and overall drive or ambitions.

A psychological dependency affects a person’s sense of purpose and priorities in such a way that he or she creates a new lifestyle that centers around getting and using amphetamines. Over the course of long term amphetamine use, the addict’s life slowly falls apart bringing about one or more of the following consequences:

Much like a physical dependency, a person’s life circumstances will only worsen with continued drug use.

Effects on the Cardiovascular System

According to the Institute for Substance Abuse Treatment Evaluation, amphetamine’s ability to increase blood pressure levels places excess strain on heart and blood vessel linings. These effects place a significant strain on the heart, especially in cases where plaque build-up exists along blood vessel passageways. With long term amphetamine use, users remain at risk of heart attack, stroke and developing heart disease.

This degree of damage has widespread effects on a person’s overall physical and psychological health. In this state, the brain has become a diseased environment that relies on amphetamine effects to function. With continued drug use, these conditions only grow worse.

With long-term amphetamine use, users enter into a continuous state of emotional turmoil as the drug’s effects weaken chemical processes in the brain. While some of these effects do develop out of withdrawal episodes, long-term users only experience mild relief from emotional distress when using the drug.

Over time, damage done to the brain’s frontal lobe regions places a person at risk of developing:

According to the National Center for Biotechnology Information, symptoms may take the form of:

Ultimately, long term amphetamine use can bring about serious consequences to a person’s overall well-being and ability to function in daily life. While these drugs do offer certain therapeutic benefits, their best suited for short-term treatment purposes.