One of the effects of amphetamine use -especially when taken in large doses- is amphetamine psychosis. With repeated use of this highly addictive stimulant drug, a user may experience episodes of psychosis that can resemble that of the symptoms of a schizophrenic disorder. In some users, symptoms resolve within 2 weeks the drug was last used, others may experience longer duration of psychotic symptoms. This is important to note, as the possibility of a psychiatric disorder may be present.

According to the U.S. National Library of Medicine, use of amphetamine and methamphetamine is widespread in the general population and common among patients with psychiatric disorders. Amphetamines may induce symptoms of psychosis very similar to those of acute schizophrenia spectrum psychosis.

What are Symptoms of Amphetamine Psychosis?

Amphetamines, when compared to other stimulant type drugs, such as cocaine, are more probable at inducing psychosis in a user. This may be due to the duration of the effects of amphetamine on the brain. The euphoric feeling (or high) that many users experience may last several hours, while a cocaine high may last up to 30 minutes. Therefore, amphetamine users have a higher possibility of developing a psychotic disorder with repeated use of the drug. Some of the symptoms of psychosis are: 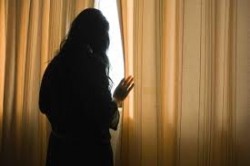 Amphetamine-induced psychosis can cause paranoia and related symptoms.

The larger the amount of the amphetamine dose taken, the more prone a user is to experience psychosis. The danger of the psychosis is the impact it can have from the results of the actions taken during a psychotic like moment. There is no telling if a person can cause harm to themselves or to someone else. If a psychiatric disorder is present, the results can be more harmful.

The best way to avoid psychosis induced by amphetamine is not to use the drug, especially in large doses, and for long periods of time. If you or a loved one are abusing the drug in any way, or have become addicted to it, then treatment should be sought as soon as possible. Amphetamine abuse has negative side effects, among psychosis from a large dose, there is also the possibility of coma or death due to an overdose. Talk to an addiction specialist immediately to begin treatment soon, and safely quit the drug.