What is Amphetamine Psychosis?

Amphetamine psychosis is a condition that can affect an individual who has been abusing high doses of amphetamines for an extended period of time. This issue, which according to CESAR is “similar to schizophrenia,” involves paranoia, hallucinations, and violent or erratic behavior. A person can experience this effect no matter what amphetamine drug they are taking; methamphetamine, amphetamine, and dextroamphetamine can all cause issues with amphetamine psychosis if taken in high enough doses every day.

What Leads to Amphetamine Psychosis?

Like with cocaine, amphetamines release dopamine into the brain, causing a pleasant reaction. Those who abuse the drug are hoping to experience an extreme version of this reaction, called euphoria. The feeling becomes addictive and the individual will take more in order to continue feeling it.

According to the NIDA, “With repeated exposure to cocaine, the brain starts to adapt, and the reward pathway become less sensitive to natural reinforcers and to the drug itself.” The same issue occurs with amphetamine abuse; it is called tolerance. As tolerance develops, the abuser will need to take higher doses of the drug each time in order to feel those effects.

These extremely high doses of the drug act on the brain so strongly that, eventually, the individual may come to experience the negative side effects of the drug in a way that becomes more like a chronic mental illness. Like in the case of other stimulants, many abusers will binge on these drugs as well, which as stated by the CHCE, is most often the behavior that causes this condition. Despite the issues of amphetamine psychosis, users who arrive at this point are usually addicted already and will not want to stop taking the drug no matter how negatively it affects them.

What are the Symptoms of Amphetamine Psychosis? 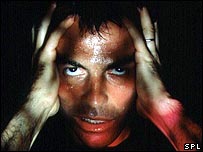 Amphetamine psychosis can cause hallucinations, aggression and violent behavior.

Also called toxic psychosis or stimulant-induced psychosis, this condition is extremely dangerous and will be very upsetting for friends and family members to see an individual struggle with. It is important to understand that, in the event of someone exhibiting the symptoms of this disorder after abusing high doses of amphetamines for a long time, treatment will be necessary.

The symptoms of amphetamine psychosis are

All of these symptoms point to an individual who is experiencing intense amphetamine psychosis. Because the condition is so similar to schizophrenia and other mental illnesses, it can often be mistaken for such, but you should not rule out the possibility that the individual might be acting this way because they are on drugs, especially if they have never shown signs of psychosis or schizophrenic behavior before. The condition can be very terrifying, though, for both the individual and others around them.

Is Someone who suffers from Amphetamine Psychosis Dangerous?

Yes. An individual with this condition is extremely dangerous and difficult to predict. They will be intensely afraid of others, even those they’ve known their whole lives, as a result of their paranoia. They will likely become convinced that those who care for them are actually trying to hurt them which can make them very volatile.

The tendency of an individual with this condition to hurt others or themselves is high. That is why, when approaching someone with amphetamine psychosis, you should take extreme precautions not to upset them or antagonize them. The best way to get them help is to call 911, especially if they are very upset or angry.

Under NO circumstances should you try to talk someone down from these problems yourself. An individual with amphetamine psychosis needs treatment and will likely not snap out of the condition. It might take them a week or even longer of intensive treatment before they start acting like themselves again.

What are the Treatments for Amphetamine Psychosis?

The treatments for amphetamine psychosis require that the patient be admitted into an inpatient treatment facility or a hospital, somewhere that they can be cared for 24 hours a day. Their treatment needs may also include:

Someone with amphetamine psychosis has obviously been abusing high doses of these drugs and will be addicted to the them as well. They will need to also need to attend addiction treatment and learn to fight their cravings for these drugs. Cravings for stimulants can often last long after the individual has received treatment for them so it is extremely necessary that the patient knows how to fight them or they will only relapse back into abuse after being treated for the psychosis.

According to the CHCE, “Psychosis is induced more commonly by amphetamine than by cocaine, perhaps because it is difficult to maintain high chronic levels of cocaine in the body.” That is why it is so important to understand what amphetamine psychosis is and how dangerous its effects are.

As stated by the NIDA, “11 percent of people ages 4-17 have been diagnosed with ADHD,” which is the most common reason someone would be prescribed amphetamines. Making sure that someone who is taking these drugs, especially a child, understands the importance of staying on their treatment regimen and not deviating from it to take higher doses of the drug is the best way of preventing amphetamine psychosis.