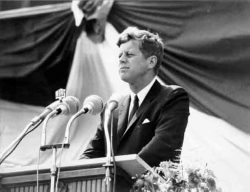 In the Cuban Missile Crisis of 1962, the world was taken to the brink of nuclear war by a President who mixed mood-modulating steroids [for his Addison’s disease] and amphetamines. Kennedy also took meperidine (Demerol), methadone (Dolophine), methylphenidate (Ritalin), meprobamate (Miltown), chlordiazepoxide (Librium), miscellaneous barbiturates and thyroid hormone – though not all at the same time. A 1972 New York Times report quotes a doctor treating Kennedy who allegedly warned him about amphetamine use: “no President with his finger on the red button has any business taking stuff like that.”