By FROM STAFF AND WIRE REPORTS 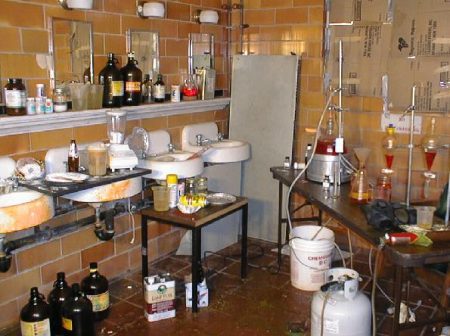 BOONE – A Watauga County prosecutor is using a law intended to combat terrorism to fight the spread of methamphetamine laboratories in northwest North Carolina.

District Attorney Jerry Wilson has charged Martin Dwayne Miller, 24, of Todd with two counts of manufacturing a nuclear or chemical weapon in connection with a methamphetamine arrest Friday. Miller also is charged with eight other drug-related offenses.

“This is a two-edged sword,” Wilson said. “Not only is the drug methamphetamine in itself a threat to both society and those using it, but the toxic compounds and deadly gases created as side products are also real threats.”

In Buncombe County earlier this month, authorities found evidence of a drug lab at a Black Mountain motel.

State Bureau of Investigation agents searched a room at the Apple Blossom Motel on July 7. They found chemicals and glassware used to produce methamphetamines, according to a search warrant.

“We’re getting our first shock of it here now,” Lt. Scott Allen of the agency said of meth production in May.

The most serious drug charges related to methamphetamine carry much lighter sentences than the weapons of mass destruction law.

The law carries a sentence ranging from 12 years to life in prison on each count. Wilson said he decided to use it while researching ways to slow the advance of methamphetamine into the region.

The law reads, in part, that the term nuclear, biological or chemical weapon of mass destruction applies to “any substance that is designed or has the capability to cause death or serious injury and … is or contains toxic or poisonous chemicals or their immediate precursors.”

The chemicals used to manufacture methamphetamine are toxic and highly combustible.

Officials with the N.C. Administrative Office of the Courts and the N.C. Attorney General’s Office said they thought that the Watauga County charges are among the first filed under the weapons of mass destruction statutes.