Essentially, all amphetamines come with a risk of dependence and addiction; however, amphetamines prescribed by a doctor and used according to the doctor’s instructions should be somewhat safe. Further, all amphetamines produced under regulated circumstances are safer than those created in illegal labs.

If you are using illicit amphetamines or have begun using prescribed amphetamines in ways other than directed by the prescribing physician, you need to stop. If you can’t stop on your own, you deserve help and Amphetamines.com is happy to offer it. Call 800-768-8728(Who Answers?) to get your questions answered, locate funding resources, and get referrals to treatment programs that can work for you.

The Medical History of Amphetamines 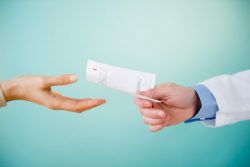 Amphetamines are often prescribed for obesity, narcolepsy, or ADHD.

The Center for Substance Abuse and Research reports amphetamine was first synthesized in 1887. German chemist L. Edeleano did not recognize its stimulant properties.

However, by the 1930s, its usefulness as a central nervous system stimulant and respiratory ones were being used, and the Benzedrine inhaler was marketed for use as a nasal decongestant. Additionally, doctors during this period recommended amphetamine for a number of other medical conditions, including narcolepsy, depression, obesity, hyperactivity, hangover, and morning sickness. Many of these ailments still have some form of amphetamine prescribed for them.

Amphetamine was incredibly popular because it was cheap, long-lasting, freely available, and because medical experts declared it did not pose a risk of addiction, which we now know to be completely untrue. Due to these attributes, oral and injectable forms of amphetamine – like methamphetamine – began being developed and distributed.

In the 1960s and 1970s, the abuse of amphetamine became a problem. Users discovered that intravenous application of amphetamines – particularly meth – got users high and tooke effect more rapidly than taking the drugs orally would.

By the 1980s, concentrated methamphetamine, or crystal meth, had become an acute law enforcement problem.

Although amphetamine was initially used for medical purposes only, it did get diverted into recreational use. Both illicit, recreational amphetamine use and legal, medical use continue today.  Although one poses a greater risk, both have a risk of addiction.

You may know the following amphetamine medications:

All amphetamine medications are labeled Schedule II drugs by the Drug Enforcement Administration (DEA) and the Food and Drug Administration (FDA). This means they have a high potential for abuse and this can lead to psychological and/or physical dependence.

Although amphetamine can be prescribed and taken quite safely, diversion of the medication into recreational use has resulted in a growing pattern of abuse. The Substance Abuse and Mental Health Services Administration (SAMHSA) reports nonmedical use of Adderall increased among adults from 2006 to 2010, particularly among young adults aged 18 to 25. This pattern of non-medical use is also leading to a number of emergency department visits.

Not all amphetamine use is dangerous, but even prescribed amphetamine has the risk of abuse.

If you need help breaking your amphetamine habit, Amphetamines.com can help. Just call 800-768-8728(Who Answers?) and speak with someone today.

Calls to numbers on a specific treatment center listing will be routed to that treatment center. Additional calls will also be forwarded and returned by one of our treatment partners below.

Calls to any general helpline (non-facility specific 1-8XX numbers) for your visit will be answered by one of our treatment partners, a paid advertiser on Amphetamines.com.