Adderall, one of a handful of prescription medications used to treat attention-deficit hyperactivity disorder, has also become a fairly popular drug of abuse. As a prescription amphetamine drug, Adderall is considered a controlled substance, categorized as a Schedule II narcotic.

As with any controlled substance, Schedule I and Schedule II classes in particular carry a high risk for abuse and addiction. Anyone who takes this drug on a long-term basis or disregards prescription guidelines will start to show Adderall addiction signs over time.

Over time, gradual changes in a person’s physical and psychological health start to surface as the effects of the drug continue to weaken brain and body processes. Here are five of the most common Adderall addiction signs to watch out for:

Adderall works as a central nervous system stimulant that speeds up most every major bodily process. By stimulating individual cell receptor sites in the brain, Adderall causes excess amounts of vital neurotransmitter chemicals to be released in the brain. 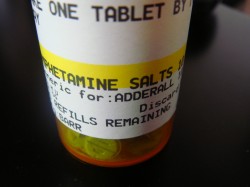 Filling prescriptions early is a sign of Adderall abuse.

According to the University of California Irvine School of Medicine, this overstimulation of receptor sites causes brain cells to grow weaker with each successive dose. In the process, they become desensitized to Adderall’s effects. When this happens, larger doses are needed to produce the same desired effects. This Adderall addiction sign will persist for as long as a person keeps using.

Healthy psychological functioning relies on the brain’s ability to maintain a delicate balance of neurotransmitter chemicals. According to the U. S. Food & Drug Administration, once imbalances start to form, Adderall’s effects leave users unable to control their impulses, emotions and reasoning abilities. In turn, a person starts to exhibit the following Adderall addiction signs:

Long-term Adderall use essentially “burns out” brain cell receptor functions, an effect that mirrors how other bodily processes are affected. Over time, Adderall addiction signs of exhaustion and fatigue result from the body’s inability to properly metabolize food nutrients. As a result, a person’s energy levels remain abnormally low.

As the brain and body become more dependent on Adderall’s effects, a person’s motivations and priorities start to center on getting and using more drugs. Adderall addiction signs affecting a person’s lifestyle most often take the form of: