Adderall, a drug that is popular for both its licit and illicit uses and effects, has been known to create intense withdrawal syndromes in users. While Adderall can be very effective in treating ADHD, those who take the drug as prescribed and those who abuse it have a possibility of becoming dependent it. Adderall’s withdrawal side effects, which occur when a dependent individual suddenly stops taking the drug, are extremely intense and can sometimes even be dangerous.

The Symptoms (and Their Side Effects) of Adderall Withdrawal

According to the NIDA Teen, “When a person who regularly abuses stimulants stops taking them, they may experience withdrawal symptoms.” This can occur in those who are being treated with Adderall in the long term as well. These symptoms have an effect on an individual’s life as well as on those who care for that individual.

The NLM states, “You may develop severe depression and extreme tiredness if you suddenly stop taking dextroamphetamine and amphetamine after overusing it,” but these are not the only issues that can occur as a result of Adderall’s withdrawal syndrome. The most common symptoms of Adderall (and other types of stimulants) withdrawal are listed by the NIDA Teen. They include: 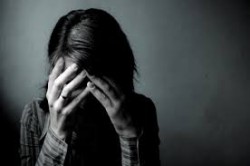 The depression that can be caused by Adderall sometimes may lead to suicidal thoughts.

The symptoms of Adderall withdrawal have their own side effects which can cause many issues for the individual as well as their loved ones. However, there are other side effects of the process which can be problematic as well.

For some who abuse Adderall and other prescription stimulants, suicidal thoughts occur as a result of their depression. According to the FDA, patients are encouraged to tell their doctors about “any mental problems” they may have, including a “family history of suicide.” While this may not occur in every individual’s withdrawal syndrome, the side effects of depression can be extremely intense and there is no way of knowing how someone will respond to it. Especially if a person has been abusing Adderall for a long time, there is a potential that they could experience this issue.

Stimulant-induced psychosis occurs when a person has been abusing large quantities of Adderall (or other stimulant drugs) or abusing them for a long time. This syndrome often must be dealt with simultaneously with Adderall withdrawal and can even require the need for the patient to be restrained when treated in a hospital or rehab center.

The CHCE states, “Psychosis is induced more commonly by amphetamine than by cocaine, perhaps because it is difficult to maintain high chronic levels of cocaine in the body.” Because Adderall contains two types of amphetamines (dextroamphetamine and amphetamine), there is a real danger of stimulant-induced psychosis occurring in those individuals who regularly abuse the drug (and especially those who binge on it).

This issue also has many side effects of its own including the need for intense counseling and medication, the possibility of being arrested, or causing the individual to do something extremely dangerous and hurt themselves or someone else. It is important to understand that, even if the individual has not begun to experience stimulant-induced psychosis as a result of binging on Adderall, there is a potential that this may occur.

Another common side effect of Adderall withdrawal is experience of cravings triggered by specific objects, people, or experiences long after the individual quits Adderall. This could even occur after all other withdrawal symptoms and side effects have subsided.

According to the CHCE, “During the late withdrawal phase, individuals may experience brief periods of intense drug cravings such that objects and people in the addicted person’s life can become a conditioned trigger for craving and relapse.” This will be something the individual will need to learn to handle through behavioral therapy but may always be somewhat of an issue, especially in the case of long-term, high dose Adderall abuse. Triggers should be handled carefully because they can always allow a possibility for relapse.

The side effects caused by Adderall withdrawal are numerous, dangerous, and should not be taken lightly. If you have been abusing Adderall, or even taking it as recommended by a doctor for a long period of time, seek help in order to make your detox from Adderall as safe and complication-free as possible.