According to the University of Maryland, levoamphetamine carries psychoactive or mind-altering properties. Not unlike other psychoactive stimulants, levoamphetamine can be addictive when not taken as prescribed. Ongoing abuse of the drug can damage brain functions as well as place a person’s overall health at considerable risk.

As a psychoactive agent, levoamphetamine alters chemical neurotransmitter levels in the brain. Once ingested, elevated dopamine and norepinephrine chemical levels produce the feelings of elation and increased energy users feel. Ongoing abuse of the drug depletes chemical neurotransmitter levels to the point where the brain require the drug’s effects in order to function normally. This dependency process marks the first sign of addiction. 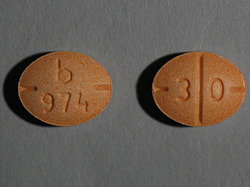 Levoamphetamine is one of the chemicals that make up amphetamine.

Cocaine, a Schedule I narcotic, is well known for its high potential for addiction. In actuality, cocaine’s potency prevents it from having any medicinal uses that warrant placing people at risk of addiction. Likewise, the prescription requirement placed on levoamphetamine attempts to reduce the potential for abuse, though the drug does carry certain medicinal properties.

The way addicts abuse the drug (snorting and shooting up) greatly alters the intended long-term effects of levoamphetamine. As a result, its addiction potential can equal and even exceed that of cocaine.

With ongoing use, damaged brain structures and functions give rise to psychological dysfunctions that impair a person’s overall cognitive and emotional health. Symptoms of developing brain damage include:

Health risks associated with levoamphetamine can vary depending on a person’s overall health status. In any event, the continual misuse of the drug will likely bring about certain health problems related to the effects of the drug on the body.

As the central nervous system controls a wide range of bodily systems, such as heart function, appetite control and digestive functions, using the drug on a long-term basis can potentially place one or more of these systems at risk.