10 Lisdexamphetamine Side Effects You Can’t Miss

Lisdexamphetamine can be beneficial to people who have Attention Deficit Hyperactivity Disorder (ADHD), because it can help them focus and have more control over their actions. According to the US National Library of Medicine and National Institutes of Health, Lisdexamphetamine is prescribed in capsule form to adults and children who have ADHD. Lisdexamfetamine is in a class of drugs called central nervous system stimulants, and it works by altering the amounts of natural substances in a person’s brain.

In proper doses prescribed to a person by a psychiatrist, Lisdexamphetamine can significantly help them with ADHD, but when this drug is taken illegally or when a person does not take the proper doses given by their psychiatrist, the side effects from the drug can be life threatening and dangerous. 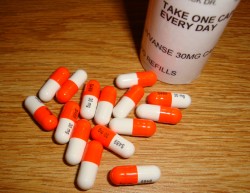 Lisdexamphetamine is prescribed to treat ADHD. When abused the drug is dangerous and addictive.

Lack of Sleep: A person not following doctor orders, or taking Lisdexamphetamine illegally will have trouble sleeping at night, and they may go for days without any sleep.

Dilated Pupils: Lisdexamphetamine is a drug and will cause a person’s pupils to dilate.

More Talkative: Since Lisdexamphetamine is a stimulant, a person on the drug will talk more and be more active.

Jitters: Some people who take Lisdexamphetamine, legally or illegally, will be jittery and fidget more with their hands or clamp their teeth.

Dry Mouth: Dry mouth is a common side effect of Lisdexamphetamine, and will get worse if a person forgets to hydrate while using the drug.

Increased Activity: While on Lisdexamphetamine, a person will be more active and have more energy than normal.

Excessive Sweating: A person may sweat more while on Lisdexamphetamine, and if they are continually active while on the drug, their sweating may be excessive.

Anxiety: Lisdexamphetamine is a nervous system stimulant so a person on the drug, especially when they abuse the drug, may have increased anxiety.

There are other side effects that can occur from taking Lisdexamphetamine, and these side effects will require the need of medical attention. According to the US National Library of Medicine and National Institutes of Health, some serious side effects of Lisdexamphetamine include, seizures, pounding heart, chest pain, hallucinations, shortness of breath, numbness of limbs, mood swings, tics, and blurry vision. In addition, Lisdexamhetamine use can lead to a person having a heart attack due to the increase in heart rate.