Is Methamphetamine a Safe Treatment?

There is often some confusion as to whether or not methamphetamine can actually be a safe and beneficial pharmacological treatment for certain individuals. According to the National Library of Medicine, “Methamphetamine,” a prescription drug that is similar to but should not be confused with crystal meth, “is used to treat attention-deficit hyperactivity disorder (ADHD).”

But is it a safe treatment when the medication shares so many similarities to the illicit version?

How is Methamphetamine Utilized Medically?

The drug methamphetamine, though it is one of the most intensely addictive and dangerous substances that is currently abused in high quantities across the globe, is only a Schedule II substance in the United States because it does, in fact, have certain medicinal uses.

It can be used to treat ADHD, obesity, and several other medical issues and is taken in tablet form. However, according to the National Institute on Drug Abuse, it is “rarely used medically” because of the possible issues it can cause.

Is Prescription Methamphetamine the Same Drug as Crystal Meth? 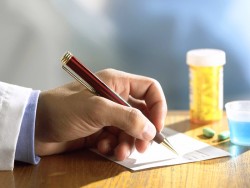 Methamphetamine is often only prescribed if other treatment options are ineffective.

These two substances are essentially the same, but they are processed, administered, and taken in ways that are decidedly different. First of all, the drug as prescribed to treat ADHD or obesity is taken as either a regular or long-acting tablet, and its illicit version is abused either by smoking or injection. These latter methods of use are extremely dangerous because they cause the drug to take effect very quickly and powerfully.

In addition, prescription methamphetamine is synthesized and processed safely and sanitarily whereas meth created for those who wish to abuse it is normally made in illegal superlabs or in the homes of those who sell it unlawfully.

“Production also involves a number of other, very hazardous chemicals,” and even the process of making the drug can be dangerous to those who live nearby to these labs.

Is Methamphetamine a Safe Medication to Take?

It is not one of the safer medical options for either of the issues it treats, simply because the drug is often diverted to the black market and because those who abuse it will do anything to obtain it. However, if methamphetamine is taken as prescribed under the care and supervision of a doctor, it can be a safe option for certain individuals.

It can be very difficult for doctors to ensure that methamphetamine is being taken safely, and the drug’s extremely high habit-forming nature can cause problems for the individual who does not take it correctly.

This is why it is not usually prescribed, except in cases where other drugs are not effective. Still, a person can take the medication safely as long as they do not stray from their doctor’s recommendations and seek treatment for any issues that may occur with their use of the drug, especially a desire to take more.

For free help finding a treatment center in your area that can help put an end to your drug abuse, call 800-768-8728(Who Answers?) today.