Are there Natural Amphetamines?

Khat is very close to being an amphetamine in its affects on dopamine receptors and its stimulant properties. Unfortunately, it also acts as a depressant and sedative which is why it is banned in many countries. In countries that it is not banned in it is widely used for recreation and relaxation. In many Middle Eastern countries it is an accepted practice to relax and smoke this herb after work or in groups among friends much like alcohol is in the United States. The DEA monitors khat very closely due to its with immigration and the Middle East.

Ephedra is a former diet drug that has amphetamine-like effects. Most of these effects mimic traditional amphetamines but are not as strong unless, it is taken in very high doses. It is extremely dangerous when it is consumed too regularly and too frequently, it causes reparatory and cardiac failure.

Ephedra is a naturally occurring form of ephedrine, which is used as a bronchodilator. It is one of the more dangerous natural amphetamine like substances because it is readily available in a variety of forms. Since, becoming a monitored drug in 2004, it continues to be heavily regulated by the FDA. It is also one of the ingredients used to make traditional illegal amphetamines such as methamphetamine. 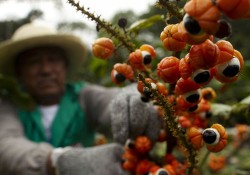 Guarana is a natural stimulant often used as an ingredient in energy drinks and coffee.

Guarana is an old Amazon remedy for the energy loss that they experienced due to fasting for religious or health reasons. Now it is used in:

Instead of being an amphetamine it is a form of caffeine a bit stronger than standard coffee. One of the effects of coffee and other caffeine based stimulants is temporarily improved concentration and performance. There are studies being conducted on whether this improvement is a true reaction or simply psychosomatic.

All of these are found in supplements and energy drinks. Some can even be found in the raw form in health food stores.

Many of the true amphetamine like substances are either illegal or controlled. This is because they are both dangerous and addictive. If you find yourself addicted to one of these or any other amphetamines call us at 800-768-8728(Who Answers?). There are many treatment types available. We can help you find a treatment for amphetamine addiction that is right for you.