Amphetamine was originally thought to have been first synthesized in 1887, when in fact it’s existed in nature all along. As of 1997, natural amphetamine compounds were found to exist within two species of Texas acacia bushes, according to the U. S. National Library of Medicine.

The dangers involved with using natural amphetamines on a regular basis pose serious risks to a person’s health as well as the ever-increasing potential for addiction.

Natural amphetamine substances include acacia, khat and guarana to name a few. Unless taken for medicinal purposes, those using natural amphetamines for recreational purposes do so for the increased energy and improved concentration these drugs provide. In actuality, the way amphetamines produce these effects can actually cause more harm than good in the long run.

Rather than supplement or add to brain and body energy supplies, natural amphetamines only “rearrange” the body’s already existing energy reserves. These drugs work by stimulating or pushing the body’s central nervous system beyond its normal capacities. While this may work well for an occasional “pick-me-up,” long-term use can hamper the body’s normal chemical processes and cause considerable deterioration of brain chemical processes.

Amphetamine’s Effect on the Brain 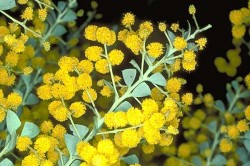 Natural amphetamines, such as acacia, have their share of risks as well.

Amphetamine effects on intricate brain chemical processes accounts for the dangers involved with using these drugs on an ongoing basis. Dopamine, serotonin and norepinephrine act as the brain’s primary neurotransmitter chemicals. Neurotransmitters regulate emotions, thinking processes, and behaviors as well as most all of the body’s motor functions.

Natural amphetamines interfere with the amount of neurotransmitter chemicals released into brain. Normally, chemical secretions occur in response to whatever a person is experiencing at the time. Amphetamine effects rather force the release of these chemicals in unusually high amounts. Over time, neurotransmitter levels become depleted and must rely on the effects of the drug to release needed chemical amounts.

Long-time users of natural amphetamines well know how these drugs can take a toll on the body’s overall health. When first starting out, the drug’s effects produce the desired increase in energy and clarity. Over time, the brain develops a tolerance to the drug’s effects. Meanwhile, brain and body chemical processes continue to deteriorate from overexertion.

Health dangers associated with ongoing use of natural amphetamines include:

As natural amphetamines can easily interfere with normal brain chemical processes, they ultimately alter how brain cells signal or communicate with one another. These processes have drastic effects on the brain’s reward circuitry.

The brain’s reward circuitry ties in with cognitive processing, emotions and learning. In effect, every time a person ingests a natural amphetamine, the drug’s effects “rewire” the brain’s reward system. With ongoing use, this mechanism drives the addiction process. Over time, users of natural amphetamines develop persistent drug cravings, withdrawal effects and an overwhelming need to obtain and use the drug.