Amphetamines work by increasing dopamine and serotonin levels in the brain and stimulating the central nervous system to make the person feel energized, focused, alert, or euphoric. These medications are prescribed to treat ADHD, narcolepsy, and obesity, but, they are habit forming and highly addictive if used for a long time, in abnormally high amounts, frequently, or abusively.

Dependency can happen to anyone and when the medication is discontinued, the person suffers withdrawals and it takes time for the body and mind to recover. According to the U.S. Centers for Disease Control and Prevention, “The most commonly used types of drugs included: asthma medicines for children, central nervous system stimulants for adolescents…” This makes treatment options for amphetamine withdrawal all the more necessary.

Amphetamine withdrawals can be severe depending on the individual and their amphetamine uses. Amphetamine use takes its toll on the person’s brain and central nervous system which controls bodily functions necessary for survival. Safety during detox is a major concern because some physical withdrawal symptoms are dangerous, including;

Psychological withdrawal symptoms can be complex. Many amphetamine abusers have co-existing mental health or physical impairments and some are poly substance abusers. Psychological problems often associated with repeat amphetamine use or abuse includes: 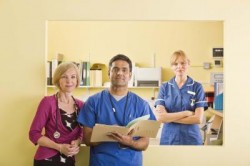 Detox centers can help you cope with withdrawal from amphetamine.

Treatment for amphetamine withdrawal requires a safe environment with easy access to medical professionals who will monitor, support, and provide necessary medical treatments for the person throughout the detox and withdrawal processes. Detox may also involve medications to alleviate symptoms of pain, nausea, or anxiety, as well as antipsychotic medications in cases of hallucinations or psychosis.

There are a variety of treatment options for amphetamine withdrawal that are available through outpatient, inpatient, or residential treatment centers. Once the detox is complete, the programs will vary by the facility, their amenities, resources, professional access, and staff availability. The primary goal is to help the person remain abstinent while they stabilize physically and psychologically before they begin the next step of their recovery.

Depression is a major concern during withdrawals from amphetamines. Combined with exhaustion, depression can lead to other psychological problems including suicidal tendencies. Depression can last for months after completing a formal detox and treatment options for amphetamine withdrawals must be able to help the person through counseling and therapy support with resources to cope with the withdrawals and remain abstinent, while preventing relapse.