Reality television get a bad rap. There are some shows that are legitimately filmed in documentary fashion and there are those that are manipulated and edited and there are even ones with scripted portions. The shows come in a variety of forms. But, that doesn’t make them without benefits. One genre that has provided a benefit or two is reality addiction programming.

In the past, television took a very black and white approach to dealing with addiction. As the National Institute on Drug Abuse notes: “Many people do not understand why or how other people become addicted to drugs. It is often mistakenly assumed that drug abusers lack moral principles or willpower and that they could stop using drugs simply by choosing to change their behavior. In reality, drug addiction is a complex disease, and quitting takes more than good intentions or a strong will.” Because of this, amphetamine addiction was dealt with very simplistically.

Addicts were weak willed losers; and dealers were big, bad villains; and amphetamines immediately addict or kill people. But, addicts and those close to them know that the reality is very different for most people. How do you explain that when everyone believes what’s on TV? 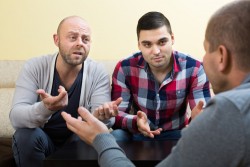 Shows like Intervention provide audiences with a better understanding of how drug addiction affects everyone involved.

Television started approaching addiction with more complexity in 2005, when A&E first aired episodes of Intervention. The show was immediately a big hit and A&E ordered a full season of episodes. In 2009, the show would even receive an Emmy for Outstanding Reality Program. It really did create and master the genre.

Although, reality television is not perfect, addiction programming has played a role in educating the public.

Friends and families of addicts often feel isolated when dealing with the addiction. “Many Americans today do not yet understand why people become addicted to drugs or how remarkable scientific advances are literally redefining the arena of addiction, notes Nora D. Volkow, M.D., Director of the National Institute on Drug Abuse (NIDA).” Shows like Intervention, however, give the general public a vocabulary and an understanding of addiction. This means that those close to addicts have a shared language with others and that can help them break out of an isolated state.

Plus, these shows can be accessed by addicts who can more objectively see what addiction does to those around it. With the distance, defensiveness may be made smaller. Also, treatment is explained and recovery is dealt with. This can help addicts feel less scared about reaching out for help.

For the general public, these programs demonstrated the many ways drug addiction is not a failure of will. That perception decreases with each viewing of this type of programming. That means people can be more empathetic to addicts and help decrease the shame that may trigger a relapse.

It can’t all be good. When Intervention dominated ratings, other networks rushed to create similar shows and those shows began to compete for audience members. The easiest way to do this was to up the shock value. This means that the shows sought out the most extreme addictions and heightened the misery attached to them through editing.

For viewers, especially those battling an addiction and desiring treatment, it is important to remember:

If you are ready to seek help for your amphetamine addiction and you want to find something that fits your needs and your budget, contact the experts at Amphetamines.com at 800-768-8728(Who Answers?). Get the real story.