If you are using your prescribed amphetamine medications as directed by your doctor, you are probably safe from becoming addicted to it or dependent on it. However, if you are using illicit amphetamines, like methamphetamine, or using prescription medication non-medically, you are probably already dealing with addiction or dependence. If that’s the case, it’s time to get yourself treated.

If you do have a problem that warrants treatment, you aren’t alone. As the following statistics will demonstrate, the nonmedical use of stimulants is a growing problem and it can be linked to the mounting number of attention deficit/hyperactivity disorder (ADHD) diagnoses and subsequent prescriptions. Perhaps, that is how you ended up with your current amphetamine problem.

What follows are statistics focused primarily on the prescription amphetamine epidemic, but there are an equal number of concerning stats related to methamphetamine and crystal methamphetamine use as well. Just because that isn’t mentioned here doesn’t mean that it is safe. It isn’t.

For help dealing with your amphetamine addiction, contact Amphetamines.com at 800-768-8728(Who Answers?) and ask questions, discuss financing, and request treatment recommendations. We can take care of it all.

1. The number of non-medical users of stimulants is growing

The National Institute on Drug Abuse (NIDA) reports the percentages of current nonmedical users of stimulants in most years between 2005 and 2012 were lower than the percentage of the population aged 12 or older using non-medically in 2014. The number is growing.

2. More people are visiting the emergency room for stimulant medication use

According to the Drug Abuse Warning Network (DAWN) Report, in the years between 2005 and 2010, emergency room visits concerning ADHD stimulant medications rose from 13,379 to 31,244.

3. Adults 18 and older are seeing great increases in the number of emergency visits for stimulant medication use 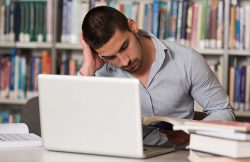 Those who attend highly selective colleges are more likely to abuse amphetamines.

The DAWN Report also asserts the volume of emergency visits for stimulant medication increased considerably for adults aged 18 or older between 2005 and 2010.

4. Non-medical use of stimulant medication that lead to emergency visits increased substantially

The DAWN Report also informs readers the number of emergency visits related to stimulant medications that involved non-medical use between 2005 and 2010 amplified from 5,212 to 15,585. Visits relating to adverse reactions amplified from 5,085 to 9,181.

The MIT report goes on to assert diverted prescription stimulants (primarily, amphetamines like Dexedrine and Adderall) are second only to pot in their popularity with college aged individuals.

The MIT report references a study at a Midwestern college, which discovered 3 percent of students were diagnosed with ADHD. The same number were prescribed stimulants. However, 13.7 percent of the students studied reported trying the drugs without a prescription.

9. An alarming number of people use prescription drugs non-medically

The NIDA asserts that most prescription medicine users do so responsibly. However, roughly 52 million people, or 20 percent of those aged 12 and older, report having used prescription drugs for non-medical reasons at least once.

10. ADHD diagnoses are on the rise

The NIDA references a U.S. Centers for Disease Control and Prevention statistic, which claims: as of 2011, 11 percent of people ages 4–17 have been diagnosed with ADHD. That’s 1 in 10. And every time more people are diagnosed, more prescription amphetamines enter the marketplace. These are often diverted to non-medical use.

These stats can be a little overwhelming. But, the message you should walk away with it that you aren’t alone. Many people face amphetamine addiction and you all deserve help. Call Amphetamines.com to receive it. Call 800-768-8728(Who Answers?) now.