Tips for a Safe Amphetamine Detox

An amphetamine detox may be one of the hardest endeavors a person will have to face in their lifetime due to the effects of the drug on a person’s physical health and mental health. The best way to ensure a safe amphetamine detox is for a person to receive professional help from a rehab or health care facility during their detox.

Amphetamine withdrawal symptoms can be physically exhausting and painful for a person coming off of the drug, but the psychological withdrawal symptoms need to be addressed with a therapist because treatment for them should be evaluated and provided by a professional to ensure the best results.

According to www.dhs.state.il.us, amphetamines increase energy and produce a sense of pleasure and peace. The drug can fight fatigue and allow people to work around the clock. It induces exhilarating feelings of power, strength, energy, self-assertion, focus, and enhanced motivation. This high is long lasting compared to other drugs and can often linger for 8 to 24 hours. The high is usually followed by intense mental depression and fatigue.

Amphetamines are often abused for their pleasure enhancing effects, but given their nature to cause mental problems, such as depression, once the drug leaves the body, many people to want to stop using the drug all together.

What to Expect when Detoxing from Amphetamine 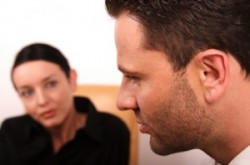 Detoxing from amphetamines is a sensitive process. Make sure you have support along the way!

Every person will detox from amphetamine differently, some people may only have physical withdrawal symptoms for a few days while others may have them for a couple weeks, or some people may not experience anxiety while others will experience high anxiety. Although withdrawals may differ from person to person, given the intensive nature of amphetamine, almost every person who is addicted to the drug will experience some type of withdrawal symptoms.

Common withdrawal symptoms for amphetamine are as follows:

The psychological effects of amphetamine can last months to even years after a person has stopped taking the drug, and can be one of the hardest obstacles to overcome when trying to stay clean. Depression is seen in the majority of people who stop taking amphetamines because of the depleted serotonin levels that occur in a person’s brain after taking the drug for so long.

The most important tip for a person to remember if they plan on detoxing from amphetamine is to have support. Having other people around whether medical professionals or family or friends helps provide people with extra strength to get through the tough times during detox.

Another important tip for a person to remember to do when they detox is to join a support group. Even the shyest individuals can benefit from a support group such as Narcotics Anonymous because being around other people who have been through the same problems helps people to understand that they are not alone and will provide people with an environment to go to that they will not be judged in.

A person should also make an effort to see a therapist especially within their first month of detox to help with their psychological withdrawals and to better understand why they are feeling the way they are.