Amphetamines exist as one of the most addictive drugs on the market, capable of producing harmful effects within a short period of time. Both prescription amphetamines, such as Ritalin and Strattera, and illegal drugs like crystal meth can cause widespread damage to the brain and body when abused on a regular basis.

Rather than coming and going like other types of symptoms, amphetamine psychosis symptoms can persist for up to 10 days after a person stops using the drug. Considering amphetamines typically leave the bloodstream in less than five day speaks to the degree of damage these drugs can cause over time.

The brain’s tolerance for amphetamines rises quickly, driving users to ingest increasingly larger doses over time. After a certain point, a person has to take successive drug doses of large quantities in order to experience the drug’s desired effects. Under these conditions, amphetamine psychosis symptoms will likely start to develop.

Amphetamine psychosis symptoms all represent various degrees of breaks from reality, which typifies psychosis in general, according to the National Alliance on Mental Health. As with any mental or emotional state, psychotic breaks result from severe chemical imbalances in the brain.

Amphetamines gradually offset brain chemical levels with continued use. For chronic drug users, psychotic-like symptoms can take shape early on. The more severe the symptoms, the more out of balance chemical levels have become, which also means a certain degree of brain damage is present.

The limbic system regulates emotional responses, which tie in directly with the brain’s cognitive-based areas where thoughts form. The combination of disorganized thinking processes, erratic emotional responses and loss of impulse control makes users prone to violent behavior displays. This amphetamine psychosis symptom can endanger the user as well as anyone else who’s in his or her vicinity. 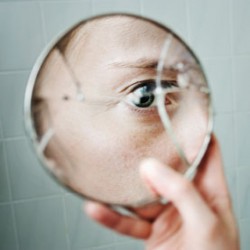 Psychotic symptoms, such as paranoia and hallucinations, can occur because of amphetamine use.

As one of the more prominent amphetamine psychosis symptoms, hallucinations can take more than one form. The most common types of hallucinatory experiences include:

With auditory hallucinations, a person may hear voices or perceive random noises as voices. Visual hallucinations involve seeing people or things that aren’t there.

Likewise, with smell, a person may smell something burning for no logical reason. People experiencing tactile hallucinations often believe they have bugs, also known as “crack bugs,” crawling on their skin.

Disorganized cognitive and emotion-based functions can create any number of perceptions, some of which may be frightening. Self-mutilating behaviors often stem from the thoughts, images or voices that take shape inside a person’s mind.

As one of the more noticeable amphetamine psychosis symptoms, self-mutilation may take the form of:

In the case of scratching, the sensation of bugs crawling on the skin can become so bad as to leave sores and abscesses on the skin from continuous scratching.

Psychosis conditions can encompass any number and type of behaviors, all arising from warped thinking processes and skewed emotional responses. Some forms of psychosis may harbor severe depression-like symptoms, such as:

When in a psychotic state, these symptoms can drive a person to dwell on suicidal thoughts to the point where he or she starts talking suicide. Someone experiencing this amphetamine psychosis symptom may actually go so far as to act on these feelings.

All combined, these symptoms cause a person to become highly suspicious and distrustful of others, according to the University of Arizona. Oftentimes, users may feel they’re being watched.

As with most any psychotic state, amphetamine psychosis symptoms can fluctuate from extreme to mild. One minute a person may enter into a fit of rage and the next minute experience (or appear to experience) total calm.

Someone displaying a flat affect shows little to no emotional response at all to the point where his or her behaviors almost appear catatonic-like. A person may stare off into space for prolonged periods of time or fail to respond when someone talks to him or her.

Delusions arise from fully formed belief systems within a person’s mind. This amphetamine psychosis symptom can drive a person to view his or her spouse or mother or even child as an imposter or a stranger. Delusion-based thinking will persist in the face of logical proof, which is a prime indicator that a person has lost touch with reality.

Warped thought processes form the basis for much of the odd behaviors psychosis causes. Once a person’s mind enters into a continuous train of thought, his or her speech patterns will likely start to verbally express them.

Disorganized speech patterns reflect the degree of confusion going on in the mind. Most every amphetamine psychosis symptom reflects this confusion in one way or another.

In light of the overall dysfunction that takes over when amphetamine psychosis symptoms arise, users start to display certain lifestyle changes over time, some of which include:

Without needed treatment help, amphetamine psychosis symptoms will only worsen over time while a person’s life continues to fall apart.