What are the Psychological Effects of Abusing Amphetamines?

Amphetamines are drugs that can affect an individual’s mental state, especially if the person is abusing them. While amphetamines are often prescribed to control symptoms of ADHD, those who abuse them to create different effects are putting themselves in a very dangerous situation that could lead to severe psychological side effects, which may or may not subside with time and treatment.

According to the Center for Substance Abuse Research, “When amphetamines are used, the neurotransmitters dopamine and norepinephrine are released from nerve endings in the brain and their reuptake is inhibited.” This can cause effects like improved concentration ability, improved mental focus, increased ability to stay awake, and decreased appetite. For these reasons, stimulants can treat ADHD, narcolepsy, and severe weight gain, but people misuse them often in order to gain these effects for their own reasons.

However, amphetamines, when abused, do not cause these psychological effects alone. A person will also experience euphoria and a “heightened sense of well-being,” another reason these drugs are so highly abused. Unfortunately, though, those who do will often be unprepared for other short-term effects including: 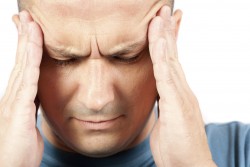 Headache, irritability, and confusion are short-term side effects of amphetamine abuse.

Though these drugs also cause a number of physical issues immediately after being taken in high doses, it is the psychological effects most people use the drugs for, and it is important that users understand there will be negative effects as well. In addition to those listed above, many people experience a release of social inhibitions, which may be desirable at first to those attending a party or interacting with others in a fun atmosphere, but this can also lead to serious problems when the individual acts outside of what they know is safe, legal, or good for them.

Abusing amphetamines can also cause severe long-term effects as well, and many of these are psychological. According to the National Institute on Drug Abuse, “Repeated abuse of stimulants can lead to feelings of hostility and paranoia” that often does not subside after the other effects of the drug do, and a person can even experience toxic psychosis as a result.

This disorder can cause severe hallucinations, itching and picking at the skin, violent behavior, suicidal and homicidal thoughts, and other symptoms similar to those of schizophrenia. While the psychosis will normally subside as the individual withdraws from amphetamines, it will require care in a 24-hour facility to ensure the individual does not hurt themselves or others.

Other long-term psychological effects of amphetamine misuse include:

If you think you need treatment for amphetamine abuse or addiction, call 800-768-8728(Who Answers?) today. We can help you find a program in your area or answer any questions you may have about amphetamines and their psychological side effects. Seek treatment now; amphetamine abuse is a serious issue and will only cause more problems in the mind and life of the abuser.