Where to Find Help for Amphetamine Psychosis

Although it normally follows an overdose, the Food and Drug Administration (FDA) found 1 percent of Adderall users experienced some form of psychosis within the first few weeks of treatment. And, Adderall is made up of amphetamine and dextroamphetamine. Further, it is regulated.

Illicit amphetamines, like meth and crystal meth, carry a greater risk of developing psychosis. In a study of methamphetamine users, 18 percent of participants reported some level of psychosis.

Should you develop amphetamine psychosis, where can you seek help? Because the symptoms of the psychosis can be so severe, you need medical intervention. This is not a condition you can treat independently at home.

If you attend a rehab with a medical component, you can get treatment for your amphetamine psychosis. To find an appropriate rehab program, contact the experts at Amphetamines.com. Just call 800-768-8728(Who Answers?) to get questions answered, find out about funding options, and get recommendations for appropriate treatment facilities. 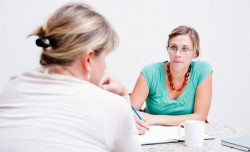 Seeking care at a rehab facility is often advised for the treatment of amphetamine psychosis.

Because amphetamine psychosis is marked by severe symptoms, learning more about those symptoms can help you identify it in yourself and in others.

Delusions are also a component and most people suffering from amphetamine psychosis deal with delusions of persecution. Your delusions will be self-referential delusions, meaning they are all about the you. You will believe that people are out to get them, meaning to harm, aggravate, or humiliate.

Another possible delusion is a delusion of thought interference. If you are experiencing these, you will believe that your thoughts are being controlled by a force outside of you. This force will add thoughts, take them away, and report them without your permission.

As you can see, these symptoms are all quite serious. They need expert help in mediating and relieving them.

Another downside is the length that the psychosis can last. Keep in mind that it will differ from person to person. It can take anywhere from a week to a month. For some people, it lasts forever.

If you believe you have amphetamine psychosis, you need to contact a medical professional. You may see your general practitioner for a referral to a specialist. If symptoms are severe, you may need to go to an emergency room for treatment. Another option is seeking care at a rehab facility.

In acute instances, you will need continual medical oversight to monitor your heart rate, blood pressure, and body temperature. The high doses of amphetamines that trigger psychosis can put a terrible strain on your body, as well.

If you are suffering from psychosis, you need help. Contact Amphetaimes.com to connect with resources that can help you recover from both the psychosis and the addiction. Just call 800-768-8728(Who Answers?).