How is Amphetamine Psychosis Treated?

Amphetamine psychosis is an issue that sometimes occurs when a person has been taking high doses of amphetamine drugs and begins to experience psychotic side effects. This can be extremely serious and even life threatening if the individual is not able to receive treatment right away.

A person may begin to show signs of psychosis if they have been abusing large doses of amphetamine, methamphetamine, or dextroamphetamine over a long period of time. This can also be caused by prescription stimulant abuse or the use of illicit drugs like crystal meth. According to a study from the Cochrane Database of Systematic Reviews, “During the phase of chronic high-dose consumption of amphetamines, many amphetamine users may have the experience of paranoia and hallucination” as well as several other symptoms, such as:

When a person begins to display these symptoms, they are in need of immediate treatment in a hospital. It is important to call 911 right away and not to engage with the individual, as they could be dangerous to you or to themselves. 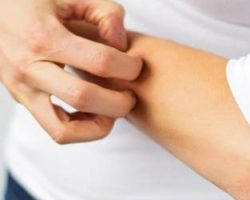 Skin picking is a common symptom of amphetamine psychosis.

The study states, “It has long been believed that dopamine antagonists, such as chlorpromazine, haloperidol, and thioridazine, are effective for the treatment of amphetamine psychosis.” These drugs are also called antipsychotics and are also used to treat issues like schizophrenia, Tourette’s syndrome, and other mental or behavioral disorders.

The research on their effectiveness is spotty at best, but in some instances, these medications can be used to sedate the individual, especially during severe drug-induced psychotic episodes. In the instance of overdose coupled with psychosis, according to the US Department of Veteran Affairs, “Acute use of benzodiazepines can also help minimize the need for physical restraints.”

Generally, the psychosis wears off between a few hours after the last usage to a few days after, but the effects of these issues often linger. For example, the psychotic effects caused by methamphetamine abuse can last “months or years” after the abuse has stopped, and sometimes, stressful situations can even trigger symptoms that have been long dormant (National Institute on Drug Abuse). For this, therapy can be extremely helpful.

Interventions like cognitive-behavioral therapy and others can help patients separate the emotions and psychotic symptoms from their true feelings and learn coping mechanisms for flare-ups of these issues. It is important that someone who has gone through this effect of amphetamine drug abuse, even if they have not experienced the full severity of its effects in a long time, be able to cope with the consequences of it and be able to recognize any events that may trigger it.

Treating Amphetamine Psychosis is a Process

Although the intense symptoms will often clear up quickly, the effects of the drug-induced psychosis can linger, and sometimes, former users can even experience the symptoms again years in the future. However, with proper professional treatment, these individuals can safely get through the initial experience and be prepared for their safer, healthier future. If you have more questions about amphetamine psychosis, call 800-768-8728(Who Answers?).