Adderall is a stimulant that is often prescribed in the treatment of Attention Deficit Disorder or Attentional Deficit Hyperactivity Disorder. Unfortunately, Adderall use can lead to physical dependence and withdrawal symptoms should the drug be abruptly reduced or eliminated from regular use. Many different signs of Adderall withdrawal may be present in someone who has recently stopped taking the drug after a prolonged period of use.

According to the University of Alabama, Student Health Center, Adderall withdrawal will often cause chronic and prolonged fatigue. The tiredness and downright exhaustion that the user will feel can be excessive and will often result in great disruptions in their ability to function regularly. Fatigue can last weeks or even months following the use of this drug. 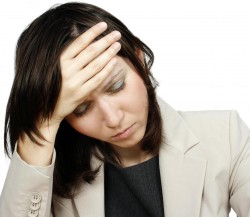 Fatigue is a common symptom of Adderall withdrawal.

Many different changes in sleep patterns appear in someone who is going through Adderall withdrawal. There may be long periods of sleep, chronic fatigue, restless sleep and periods of insomnia. Sleep disturbances of all types interfere with the user’s ability to adjust and cope with other symptoms of withdrawal.

Feeling cloudy or like your though processes are incomplete is common with Adderall withdrawal. The mental fogginess that occurs in withdrawal can persist for many weeks or months in some cases.

Because Adderall is a stimulant which reduces appetite, one of the most common signs of Adderall withdrawal is a rapid and noticeable increase in appetite. Such increases in appetite often cause users to gain excessive amounts of weight in their early phases of recovery as they are too tired to workout but too hungry to stop eating.

Adderall use can cause heightened paranoia and it generally doesn’t go away when the user stops taking the drug. One of the commonly overlooked signs of Adderall withdrawal is anxiety and irritability.

Lucid and very vivid, almost real, dreams are common in Adderall withdrawal. These dreams interrupt the third phase of sleep during which the user gets the most rest and this may be one of the causes for the chronic fatigue that user’s feel when they quit taking Adderall.

The lack of energy, depression and irritability that come with Adderall withdrawal can drive a person to think and want to do crazy things—like commit suicide. Suicidal thoughts are common in Adderall withdrawal; as such, users should consider seeking professional help to ensure their safety during this time.

Tired, cranky and most of all, irritable – those words describe an individual who is going through Adderall withdrawal to a T. Irritability is very common as the user feels uncomfortable, unsatisfied and unhappy during the early phases of withdrawal.

Finally, another one of the very common signs of Adderall withdrawal is agitation. The user will be agitated with himself, with others, with life and with the entire process of withdrawal in general. There’s not much that can be done to cure this agitation except to allow the situation to play out and let the symptoms gradually subside.