I’m in College and I Abuse Amphetamines: Do I Need Help?

It has become much more common over the past several years for college students to abuse amphetamines. This is partly because many college-aged individuals want to experience the euphoric side effects or use these drugs to loosen up at parties, but others abuse them in order to stay focused and alert for a test, a paper they have to write, or another academic obligation. Unfortunately, this popular behavior is dangerous, and those who engage in it will often need help in order to stop.

According to the Substance Abuse and Mental Health Services Administration, “An estimated 6.4 percent of full-time college students age 18 to 22 used Adderall nonmedically in the past year.” Adderall is an amphetamine-based, brand name medication meant to treat the symptoms of ADHD. “Of concern is that a full 89.5 percent of the college students who used Adderall nonmedically also reported past-month binge drinking, and more than half were heavy alcohol users.”

This highlights the fact that most student amphetamine abusers are also engaging in other dangerous behaviors as well. While many people believe using the drug is harmless and can help them stay awake long enough to finish a paper or do something else for school, this kind of behavior goes hand-in-hand with further substance abuse and other serious issues. It is important to realize what amphetamine abuse in a college setting truly is and why someone who engages in it might need help.

The Dangers of Amphetamine Abuse 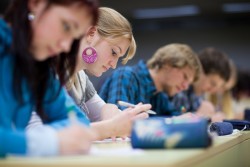 Some college students abuse amphetamines to stay alert during exams.

Amphetamines don’t just keep you awake and alert; they can also cause a series of other side effects that only become more likely to occur when the drug is abused. According to the National Library of Medicine, below are some of the more common side effects associated with Adderall use, most of which will become more severe when the drug is used in higher doses outside of a doctor’s prescription:

In addition, a person who abuses amphetamines over a long period of time can possibly develop toxic psychosis, a disorder that causes hallucinations, paranoia, aggressive and hostile behavior, and picking at the skin. An individual can develop this simply from abusing amphetamines, even if they have no prior history of psychological problems, and will require professional treatment to ensure they do not hurt themselves or others.

Amphetamine abuse can also lead to addiction, just like abusing other dangerous stimulant drugs like methamphetamine and cocaine can. These prescription drugs cause the same effects when taken in high doses, which is why they should only be taken under the care and supervision of a doctor.

Amphetamine abuse is dangerous, especially for those who do not realize how problematic this behavior is. If you have been abusing amphetamines, call 800-768-8728(Who Answers?) today and we will help you find a treatment program in your area where you can get the help you need.