Why Do College Students Abuse Amphetamines?

College students are among the most at risk populations of becoming addicted to and abusing amphetamines. In fact, according to the Massachusetts Institute of Technology, “Diverted prescription stimulants… are second only to marijuana in their popularity with this age group.” But why do college students abuse amphetamines and other prescription stimulant drugs in such high numbers?

As stated by a study in the Journal of Addictive Diseases, “College students are exposed to a great deal of misinformation about nonmedical prescription stimulant use due to the popularity of enticing myths.” These can include myths like: 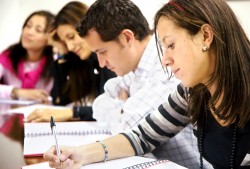 Most college students abuse amphetamines based on the belief that it will enhance their academic performance.

Because of these myths, many college students abuse amphetamines and end up dealing with serious side effects as a result.

Prescription amphetamines are also highly available on college campuses. Many students give their ADHD medications to friends while it is also often too easy for a person to be prescribed these drugs when they are of a young age. For all these reasons, college students––and especially those enrolled full-time––are likely to abuse these drugs in high doses to dangerous results.

Many individuals who are in school do not realize the risks of this misuse of prescription amphetamines. They believe that they can stop any time they like, that the positive effects outweigh the negative ones, or that, in many cases, they have no other option to turn to in order to help them succeed. This is untrue, and it is much safer and more likely to lead to positive outcomes when a person avoids amphetamine abuse in college rather than embraces it.

If you have been misusing prescription stimulants while attending school, call 800-768-8728(Who Answers?) today. We can help you find a treatment program that fits your needs.